Things That Can't Go On

Complete the sentence ... won't go on.

I've been saying for a long time that the problem with our infinite spending that is never mentioned is that when we need to borrow so much, there are very few places in the world we can borrow from, and they pretty much all have their own problems.  For fiscal year 2016, which ended September 30,  our deficit was just under $600 Billion.  In theory, the way we spend $600 billion more than we generate in revenue is by borrowing that money.  Again, in theory, we do that by selling bonds: long term and short term debts.  That's prelude to introduce this data that I saw today: 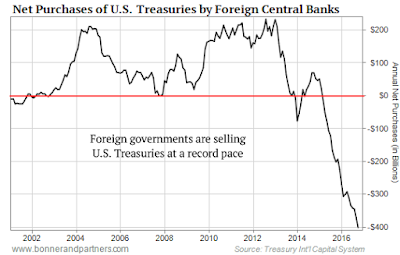 The data is Net Purchases of bonds by the foreign central banks (Bank of Japan, European Central Bank, etc.) and the negative number means those banks are selling our bonds, not buying them.  So what can we do to make our bonds more attractive?  Pay more interest?  Lower the prices?  Don't forget that since the election, bond yields have been going up and prices down.  Bond interest rates are up so much that in Switzerland, interest has almost gone positive again.  (Note - we really do need a sarcasm font)  It's pretty commonly stated that we're in a global bond rout.  Given the time scale of this data, it's possible that an uptick in sales wouldn't show up on this plot. 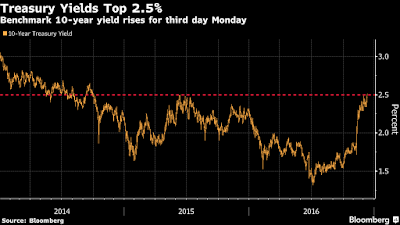 From the standpoint of bond buyers, this is a good thing.  The prices they pay for bonds go down, and the interest they get paid goes up.  From the stand point of the fed.gov, not so much.  The interest they have to pay goes up as a line in the budget making deficits worse or imposing some much needed discipline.  Of course the Fed has been buying our own bonds for a long time, (example) and there's no reason to think this sleight of hand won't continue.

In some poetic way it makes sense to talk about this today.  In the financial world, we're seeing this grand cycle of bond prices going down for a long time and then starting back up (10 year treasuries have been in a down trend since the 1980s!); and the cycle of prime interest rates being held at historically low rates for historically long times coming to an end.  In the real world, we see today is the winter solstice: the end of the cycle of every day being a little shorter and the sun setting a little farther south than the day before.  From now on, very slowly at first, days will start getting shorter, and the sun will start moving north.  The earliest sunset of the year was a few a weeks ago, and it has started setting a little later every day; the latest sunrise is still a few weeks away.  By late January, every sunset will be later and every sunrise earlier, and both will be a little farther north - until that cycle comes to an end next June.