Except for that whole "closure" part.  The doors barely close.  On the other hand, the other 95% of it is pretty good and very likely good enough to be done. 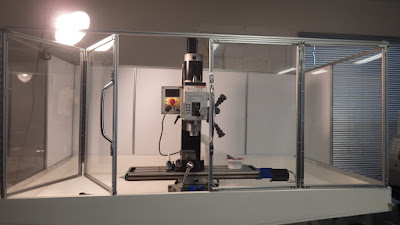 As I was saying last week, the enclosure isn't on the DVD I bought, but is in the open on Hossmachine's YouTube channel and discussed to some degree on the CNCZone forum.  In his final video, Hoss says he used some magnetic latches that grab the steel L brackets (seen pretty much whereever the horizontal and vertical elements of the frames come together).  The magnets are held in some plastic housings that Hoss 3D printed and screwed to the top rail in the front.  Well, I don't have the magnets and I don't have the 3D printer.  To compound things, you can see the enormous chrome plated handles Hoss had picked out.  How he gets the enclosure to close is to put both handles in his right hand and squeeze them together.  That pulls the two door panels closed and the magnets grab them.  In my version, the handles bang into each other and just barely allow the door frames to touch.  It will close, but it doesn't stay closed without those magnets.

Compared to a pin or some hardware to lock the doors in place, the magnets are a convenient solution, but I obviously need something to latch it closed.

For now, I'm going to try to find a few parts.  I'll say the enclosure is over 90% done.  Granted the last few percent are very important, but there's still more tweaking, optimizing and maybe even upgrading to do on everything.