The Start of the King Kong Story Arc

Most readers will have seen at least one of the trailers for the movie Kong: Skull Island that opened on March 10th.  Mrs. Graybeard and I went to see it yesterday afternoon, as weekday movie matinees have been our habit since my retirement.  If I had seen this trailer, I might not have been left with some of the impressions I left the movie with.

There might be some spoilers in what follows, but nothing that I don't think you'll find by reading more than I did.  If you really want to discover the whole thing for yourself, be warned: "Here be spoilers"

To begin with, this is absolutely not a re-telling of the classic 1933 King Kong story.  There's no bringing Kong back to New York; no Kong on display in a small theater and being freaked out by camera flashes; no Kong climbing the Empire State building with the pretty girl in hand.  There is absolutely not a "it was beauty killed the beast".  There's no Kong tap dancing on Broadway to "Puttin' on the Ritz".  No... Wait.  Come to think of it, that was Young Frankenstein.  Scratch that last one.

Instead, it's a re-imagining of the King Kong story, set at the very end of the Viet Nam war in 1973; a key scene includes a recording of Nixon announcing the end of the war.  The movie opens, though, at the closing of WWII with an American P-51 crashing onto the sands of Skull island and its pilot following under his parachute canopy.  The Japanese Zero he was fighting crashes moments later, followed by its pilot descending under his parachute canopy.  1973 makes sense in terms of the movie being based on an undiscovered island; they portray Skull Island as being discovered by Landsat, one of the first full-Earth surveying satellites.  They milk the undiscovered island story for all it's worth and throw in some plot devices to isolate the folks on the island despite the relatively modern technology of 1973.

The movie has the feel of an anti-war movie like Apocalypse Now; Samuel L Jackson plays Preston Packard, the military leader who seems disappointed to be leaving the war behind, and plays the sort of over-the-top crazy MoFo he does better than any other actor.  The anti-war feel is accentuated by the designated pretty girl, Brie Larson, who plays the "anti-war photographer" Mason Weaver, and Tom Hiddleston plays the jaded Ex-British Special Forces operator and "human tracker" James Conrad who seems to have left the British under circumstances he never talks about and whom has to be tracked down in a seedy Bangkok bar.  The Apocalypse Now feel is deliberate: director Jordan Vogt-Roberts, when asked what kind of monster movie he had in mind, suggested to it be in the Vietnam war era, as a sort of 'Apocalypse Now with monsters'.  Throughout the movie, the music of the late 60s and early 70s blares in the jungle alongside Vietnam era military hardware of all sorts.

The movie centers, though, on John Goodman as Bill Randa and Corey Hawkins as Houston Brooks, two scientists from a shadowy organization called Monarch.  Bill Randa makes reference to an atomic test in 1954 that wasn't really a test but an attack on something and being sole survivor of a ship destroyed by that thing.  The test was an attempt to kill Godzilla and both pins this movie onto a timeline in the Legendary Pictures universe defined by their 2014 Godzilla and also creates a reference to the story arc Legendary Pictures is creating, which will end in 2020 with Godzilla vs. Kong.  After the credits, there's a scene where Houston Brooks meets Conrad and Weaver and shows them records that indicate other monsters existing on Earth; the monsters seen are Rodan, Ghidorah, Mothra and Godzilla. The scene ends with Godzilla's roar.  Before the 2020 finale of this arc, Godzilla will be reintroduced in 2019 in Godzilla: King of Monsters. 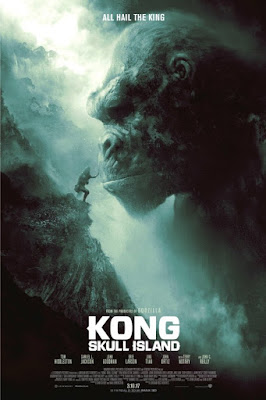 (the almost-obligatory "pretty girl meets the monster and doesn't get et" scene, somewhat like the one in the movie)

What did I think of it?  I think it was entertaining, fast-paced, Kong was great CGI, and most of the rest was great too.  All in all, it was fun.  Were the characters a little too one-dimensional and stereotypical?  Was it a bit too predictable in parts?  Well, yeah.  We're watching a freakin' giant ape movie, not Shakespeare in the park.  Still not as fun as the Iron Man movies, which I always find a lot of fun, and well played.  Tom Hiddleston, who is fantastic as Loki in the Marvel Cinematic Universe, has a really low-key role in this one (see what I did there?), despite top billing.  I'll give it a four out of five star rating.  A fine Thursday afternoon diversion.