Did Trump Just Manage to Toss His 2020 Chances?

I've said a bazillion times that I don't like following day to day politics.  I'm sure as hell not following who's going to run on the Evil Party side, or if Trump is going to be challenged by his (alleged) party.   I can't help but notice, though, that this week Trump has managed to alienate supporters all across the political spectrum.

Last week, he said he'd be willing to shut down the government to get funding for the border wall, then said a few days later that he wouldn't shut down the government if the Dems promised to fund the wall when the "emergency" funding resolution ends in February.  After that, he effectively hopped back to step one when the blow back over that started.   Of course, everyone knows of the public feud between Ann Coulter and the President, after her column, "GUTLESS PRESIDENT IN WALL-LESS COUNTRY".  Which led the Prez to "unfollow" Ann.  Unfollow!  The horrors!

I've heard at least a half dozen callers to the talk shows saying that not funding the wall is Trump's equivalent of H.W. Bush's "Read my lips.  No new taxes", which probably killed H.W.'s re-election chances.

Yesterday, Trump declared victory in Syria and said (in 25 words or less) "let the other countries pay for it", drawing praise from Syria, Russia, and Iran.  While being in Syria isn't popular across all demographics, announcing the pullout has drawn resistance from military and his Republican allies.

It seems to have led to the resignation of General James Mattis, who thinks it's ill-advised.  General Mattis, of course, is well known as Mad Dog Mattis and is probably the most popular and most highly-regarded member of Trump's team.  He's also very likely the one man most responsible for the successful campaign against ISIS.


Mattis released his resignation letter shortly after Trump’s announcement on Twitter, arguing his views on foreign policy were different than the president.

“Because you have the right to have a Secretary of Defense whose views are better aligned with yours on these and other subjects, I believe it is right for me to step down from my position,” Mattis wrote.

The general also expressed his support for sustaining the Defeat ISIS coalition overseas in his letter as well as the principles of opposing authoritarian regimes in China and Russia, and the importance of treating allies with respect.


Tonight, rumors are swirling that we will be drawing down troop numbers from Afghanistan, too.

Finally, there's the bump stock ban.  As I understand it, the Justice Department hasn't formally published the rule, but when they do so it starts the 90 day countdown until it takes effect and all bumps stocks must be either destroyed or turned in with no reimbursement, or their owners become instant felons.  The coming lawsuits will probably delay the date it goes into effect.

Like virtually all gunnies I've seen or hear comment on this, I don't particularly care about bump stocks.  Never had one, never cared about them, certainly never wanted one.  The problem is that "machine gun" is precisely defined in ATF law and this ruling contradicts that.  It sets the precedent that the next extremely anti-gun president could outlaw lots of other things by stretching laws however they see fit.  From the standpoint of 2A advocates, it strongly reinforces that Trump is not our friend.


Legally, however, the precedent set by Trump's bump stock ban is troubling, regardless of how you feel about the Second Amendment or define its scope. The president does not have the authority to rewrite laws that interfere with his agenda, whether the subject is guns or immigration. Principled critics of this administration should call Trump out whenever he oversteps his legal powers, even when they happen to like the outcome.

Finally, I suppose for style points, Trump pushed and then signed a nearly $900 Billion dollar farm bill.  It combines the usual mentality of the farm bills: help the major corporations, screw the small farm owners, hand out Food Stamps (SNAP) with no work requirements - only this time it adds lots of accommodations for hemp farmers.

It's hard to imagine how much worse a week Trump could have had.   Can he recover?  Sure.  The primary campaigns start next fall (I hear the Demmies start their debates in June).  But he sure has pissed off a lot of different groups of supporters with these five things 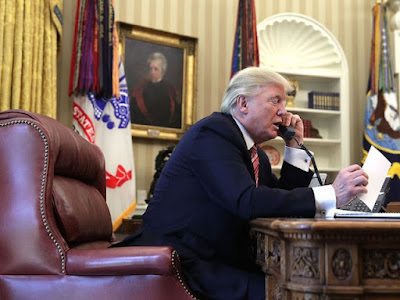