I Think the Fed Might Actually Be Doing Something Right

Here, I turn to John Mauldin of Mauldin Economics.


The last three Federal Reserve Chairs have acted like the Fed has three mandates: the two official ones (low inflation and full employment) and an unofficial third one: making sure asset prices rise as the market wants. Not just the stock market, but real estate and all other investment assets. It started with the Greenspan “Put” which morphed into the Bernanke Put (remember the taper tantrum?) and reached its apex with the Yellen Put.

And what did we get?  Bubbles.  It's arguable that every boom and bust cycle in the last 105 years was caused by the monetary manipulations of the Federal Reserve.  I'm currently reading an expansive view of that called "The Skyscraper Curse" and will have more to say as I read more ('tis the season to be busy and that has constrained reading time a bit).
Jerome Powell, the current Fed Head, seems to be acting as though he considers only the two official duties as his responsibility.  That probably has a lot to do with stock markets' bleeding off the last 15 months worth of growth in asset prices since the start of December.


This makes me think Powell is perfectly willing to walk away from that unofficial third mandate. Is he letting his inner Volcker show just a little bit? If so… damn, Skippy, it’s about time!

The Federal Reserve should be just as concerned about Main Street as it is about Wall Street. The serial bubbles of the last 30 years all had serious negative consequences. Yes, the ride was often fun, and some of us made good money in both the up and down cycles. But Main Street would be better served with a steady-as-she-goes Fed policy.

Wall Street (and the financial world in general) should create earnings and value companies based on those earnings, and not game the system to the point where valuations get incredibly stretched and then the bubble pops. It kills the average investor who buys late in the cycle and then gets scared out of the market at exactly the wrong time. People come to see investing as a game Wall Street plays for its own benefit. In fact, it is anything but a game. To most people, investing is about retirement and life.

If Powell doesn't come forward in the next couple of weeks and apologize for scaring the market, doesn't try to walk it back, we can be pretty sure he really intends for the Fed to not be an enabler of another asset bubble.  Look, I'm a retiree living on my "life's savings": I want the markets to be healthy.  It's in my financial best interest.  But it's not in the country's best interest, or the world's, for the Fed to be involved in that. I don't want the Fed head to be the second most important person in the country (or the world).

I disapprove of there even being a Federal Reserve Bank, with all the implications of a centrally controlled economy it brings, but for the moment the best we can do is hope to minimize the harm it does.  They need to raise interest rates and crank back in the trillions of dollars worth of funny money they created during the Obamanation.  Rates were so low for so long, and so much excess money was created that if another recession were to start soon, they'd be left with no tricks.  They'd be in a shootout holding an empty magazine.  Just a couple of short years ago, Janet Yellen was proposing (we hear) using negative interest rates to get people to spend and kick start the economy.  That's the kind of hocus pocus they'd pull out of their asses advanced monetary policy they'd implement in the event of another recession.


There's no real evidence that if rates go negative people will spend more to keep their savings from evaporating.  In fact, there's evidence some savers, faced with seeing their savings not growing, double down on the saving, denying themselves even more and trying ever harder to save.  As Jim Rickards put it: "As a result, many citizens are saving even more from retirement checks and paychecks to make up for the lack of a market interest rate. So a Fed manipulation designed to discourage savings actually increases savings, on a precautionary basis, to make up for lost interest. This is a behavioral response not taught in textbooks or included in models used by the Fed."

I'm sure those of you who follow such news have seen the predictions of a recession in 2019 or 2020.  The central banks need to have some ability to cut interest rates in order to do their "monetary stimulus" and that can only come by cranking back in (i.e. destroying) the money they created throughout 2008-2015.  The problem is that the effect of that monetary creation was limited to the perverse effectiveness of helping only the people who got the money before interest rates and prices went up - as is typical of all Fed manipulations. The only way to make that go away is to End the Fed. 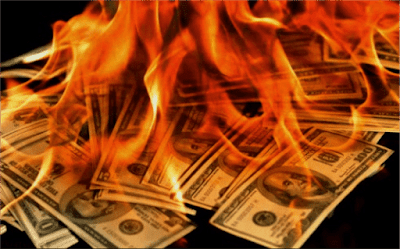