This story didn't make the two local papers or any other local source I see, so we go to the AmmoLand newsletter today.  A St. Cloud (Florida) man had his firearms confiscated and his rights revoked because he has the same name as someone else.


Last Wednesday, Jonathan Carpenter of Osceola County, Florida was sitting at home when a mail carrier knocked on his front door.

The Florida Department of Agriculture and Consumer Services was notifying him that they have suspended his concealed handgun permit.


“On or about August 12th, 2019 in Osceola County, Florida, an injunction was entered restraining you from acts of domestic violence or acts of repeat violations,” the notice read.

Carpenter was shocked and confused.  What seems to have happened next is he dove right into the hornet's nest.  An innocent man who believes in the goodness and fairness of the system would do that.


Figuring it was a mistake, Carpenter called the Florida Department of Agriculture and Consumer Services to clear things up since he has never committed domestic violence against anyone. The representative told him he had to get a form from the Clerk of the Courts saying that there weren't any actions against him.

Of course they did.  When he went to the Clerk of the Courts, he was told there was an injunction against a Jonathon Edward Carpenter - a resident of a different address.  Carpenter told the agent he was not that person, had never lived at that address and had never been accused of any domestic violence.  That person directed him to the Osceola County Sheriff's office to clear things up.  Still thinking the state was just confused rather than malevolent, he went to the Sheriff's office.  He thought he could clear things up.


The Sheriff’s office supplied Carpenter with a copy of the injunction. In the statement, the plaintiff stated that she rented a room out to a “Jonathan Edward Carpenter” and his girlfriend. She alleged that this Carpenter was a drug dealer who broke her furniture and sold her belongings without her permission. He had a gun, and she feared for her life. She was not sure if the firearm was legal or not.

Carpenter had never met the woman in question and never lived at the address listed in the restraining order. Moreover, other than being white, he looked nothing like the man the terrorized the woman.

It was apparent that the police had the wrong man, but Carpenter was in for his biggest shock yet. The Sheriff’s office told Carpenter he had to surrender his guns. Carpenter never even had as much as a hearing, yet he was losing his rights.

And this is where the system springs its "trap"; more accurately, this is where the system shows it  doesn't care the least little bit that they have the right person, they just "got someone".   It's where the reputation for putting innocent people in jail (or worse) comes from.  The Osceola County Sheriff's Office doesn't think the obvious differences in appearances and histories between the man in front of them and the accused is enough for them to say, "oops, they sent the letter to the wrong dude.  Sorry.  No hard feelings."  They should be saying, "here's a few bucks for your trouble"; instead, this is going to cost Carpenter a lot of money to get back property and a life he should have never been deprived of.

And this is why we hate Red Flag Laws, aka Extreme Protection Orders. Guilty until proven innocent.  No due process.  No protections.  Just a stupid mistake causes innocent people financial ruin to put their lives back.

How did it come to be? According to the AmmoLand news,


A police officer I spoke to off the record thinks that the courts ran a check for a Jonathan Edward Carpenter with a concealed carry permit. Although he could not tell me for sure, he thinks that is what happened in this particular case. He did say that this is a common practice.

Seems very plausible that the abomination passed last year would automate this.  A warrant for someone on domestic abuse gets filed and it automatically generates a check to see if that name is associated with a CWFL; if it is, the Red Flag is automatically thrown.

Meanwhile, Carpenter has to wait until August 27th to begin the legal proceedings to get his guns back. 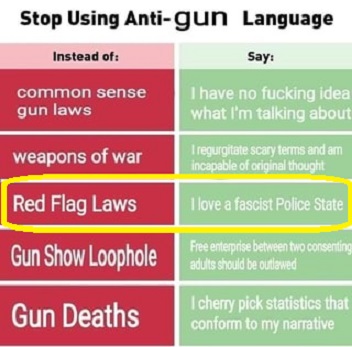