Starting to Look at 5G Cellular

In the academic sense, I'm not physically looking at a 5G link.  Smallville here will probably not get 5G for years and years.  I don't even get a particularly good 4G/LTE signal here at home.  Still, I hear the buzz and it makes me want to understand what the story is.

There's lots of buzz about 5G for the new technologies it's going to bring, but those largely come down to higher bandwidths and faster downloads for the users.  Numbers like 10 Gigabits/second get thrown around - orders of magnitude faster than 4G.  To the network providers, the attraction is that the number of subscriber devices they can support (sell) jumps up dramatically.  Just as 4G is faster than 3G was and every generation before it.  Despite the fact that 5G services won't roll out anywhere until - maybe - the end of calendar 2019, the buzz seems to center on the idea that whoever controls the networks will know everything about every business and every person in the country.  Why wait?  Avoid the rush and just get one of those "OK Google" or Alexa monitors to bug your own house now.  This security seems more like an encryption issue rather than whose base station it goes to.  No, I don't trust Huawei and the Chinese, but I don't trust the US either.

That part about security comes from what's actually a completely unrelated technology to 5G, the drive to use internet connectivity to improve services of all kinds, call the Internet of Things, usually referred to as the IOT, or (as I like to call it) the Internet of Things That Just Don't Quite Work Right (IOTTJDQWR - which doesn't quite roll off the tongue as easily).  The IOT and it's cousin, the Industrial IOT, will do simple things like put water pumps, flood gates, and all sorts of civic and utility infrastructure on the net.  The vast majority of these things are not high bandwidth users and don't need the faster data rates that 5G promises, although the lower latency/faster network might be useful.  They could be done today, and many are done over industrial radio links.

The promise of higher data rates brings the inevitable trade that higher rates usually require higher bandwidths and higher bandwidths usually require higher operating frequencies.  This also scares a lot of people.  Back to that in a minute, but first, let me show you a list of frequencies that 5G can use - not all of these will be in any particular device.  The list is from a document from Keysight, the former Hewlett Packard test equipment group, and still arguably the industry leader in this sort of test equipment. 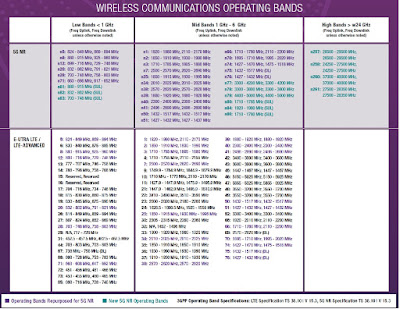 It's a bit of an eye chart if you don't enlarge it, but two things to notice are that the new frequencies are all printed in a greenish/teal sort of color; and that frequencies currently used for other purposes that have been reassigned for 5G (or dual purpose, it's not completely clear) are in purple.  Those in black, in the second vertical block, remain for LTE of various flavors.  The only new frequencies capable of high bandwidth, that are higher than the existing LTE services (virtually all below 3 Gigahertz - 3 GHz) are in the top right block and are in a few bands from 24 to 40 GHz.  Why not 60 GHz, where WiGig is currently all alone?  This chart shows why: 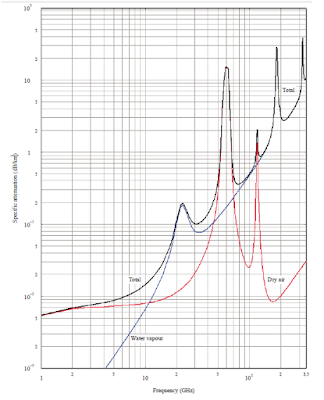 This shows the attenuation (loss of signal) due to dry air (in red), water vapor (blue) or the sum of the two losses (in black). You will see a huge peak of attenuation centered right on 60 GHz, going from around 0.3 dB/kilometer up to (guessing) 15 dB.  That means a transmitter on that peak has to put out almost 16 dB more power, or 40 times more power, than the lower frequency transmitter.  That huge a power difference means much more expensive hardware.  It turns out that dip in attenuation you see between the huge peak at 60 and the much smaller peak at about 22 GHz covers the 24 to 40 GHz range for the 5G signals.

One thing that people don't seem to understand is that it's hard to get radio frequency energy into places you want it.  Even in a controlled, lab environment, on well designed hardware, we regularly fight to get thousandths of a watt that we expect to get but that nature just doesn't want to give up.  Furthermore, the higher the frequency, the more struggles that come.

In the case of the 5G network, those struggles will be because the signals don't penetrate walls and other things as well as the lower 4G frequencies do.  It's going to call for more towers more closely spaced and fancier antennas.  The buzzword is MIMO - Multiple Input Multiple Output - it's a way of combining antennas to get better performance out of the network.  If you have a WiFi router with two or more antennas on it, you have that now.

Is 5G going to be dangerous for people carrying handsets or walking around the city?  The power density requirement in FCC-OET Bulletin 56 is the same as for frequencies we've talked about here before, 1 milliwatt per square centimeter.  Industry is experienced with designing for these levels and I don't see any reason why it should be any more dangerous than existing networks.  If anything, because 24 to 40 GHz doesn't penetrate as well as lower frequencies, it might be safer.

I've written many times on RF safety and can do so again.