Just not in those exact words.

In 2015, Hawaii made history, becoming the first US state to mandate a full transition to renewable energy. The legislation, signed into law by Gov. David Ige, mandated that state utilities generate 100 percent of electricity sales from renewable fuels by 2045.

As a wise observer said, "Promises are easy to make.  Achieving them is another story."  But that's not exactly what this story, H/T to the Foundation for Economic Education, is about.

Earlier this month, word broke that the state’s largest supplier of electricity, Hawaiian Electric Co. (HECO) was considering backing out of an enormous part of the switch to renewables, a vast storage facility (basically a huge, 185 megawatt, battery farm) called Kapolei Energy Storage.  It's being built to ensure a stable supply of electricity to the island of Oahu, which is preparing for the retirement of the AES coal plant—Hawaii’s last coal-fired power plant—and which produces 15-20 percent of the island’s electricity. The use of coal has been banned in Hawaii.

With the renewables part of the project turning up late (it's a government project after all), it looks like Oahu could be facing a bad energy squeeze, because there's nothing to charge the battery farm once the AES coal plant is shut down.

The reality is there’s not enough wind, solar, or battery storage to replace the AES plant. Hawaiian Electric has made this quite clear in recent documents, noting that it would not be able to meet its year-two renewable target (75 percent) for “more than a decade.”

This means that to replace its soon-to-be retired coal plant, Hawaii Electric will soon be charging its giant battery … with oil. In other words, Hawaiians will be trading one fossil fuel (coal) for another, albeit one far more expensive.

According to the Utility Dive website, the Hawaii Public Utility Commission has started trying to convince Hawaiian Electric not to tear down the AES coal plant to replace it with an oil-fired plant.  James Griffin, chair of the Hawaii PUC, told utility representatives, "Your plan to me amounts to a shift from one fossil fuel to another. We're going from cigarettes to crack."  As an aside, you know what Bidenomics has done to the price of oil here on the mainland; now imagine transporting it by tanker to Hawaii.  Griffin said, “Oil prices don’t have to be much higher for this to look like the highest increase people will have experienced, and it’s not acceptable. We have to do better.”

It's almost a cliche' that government mandates always come with unintended consequences, and generally produce outcomes opposite of what their intent was.  It's like the only people who don't know that are the legislators and regulators.  The free market is always better.  The legislation mandating the state go to 100% renewables by 2045 had very specific milestones: 30% renewable electricity by 2020, 40% by 2030, 70% by 2040 before being 100% renewable by 2045.  HECO is considering those intermediate steps in light of minimizing financial damages from the changes.  They have to take out the coal-fired power plant because coal has been banned.  Building an oil-fired plant in its place is an unintended consequence.

FEE Author John Miltimore presented this graphic of the shares of energy production in the US since 1950.  You can see that petroleum (the top band) peaked around the early 1980s and while never a huge supplier, is now clearly negligible.  Coal's share has been in decline since about 2008, and it looks like the biggest increase in generation belongs to natural gas. 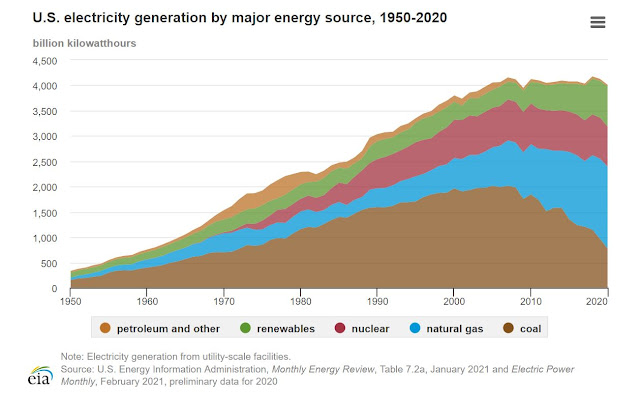