A Useful Little Tool Off the 3D Printer

Since I posted my last 3D Printer post about printing internal threads,  I made some changes in the way I'm doing things.  I've switched the CAD software I've been using from the Cura Slicer over to the Prusa slicer.  Both are freeware, and I had been getting recommendations to look into the Prusa slicer because it has more features.  Prusa is one of the big names in the field and sells printers that are very well regarded, either as completed printers or kits.  They're based in the European Union, but have dealers in the US.

I came to the conclusion that the difficulty with the printed internal threads was caused by my design, not the slicer settings, and scaling things to the right size off the printer. When you run a tap through metal, you get some additional room around the threads from the design of the tap and the drill bit you use; tables of the drill size to use before threading have a tight fit, 75% thread, and a looser, 50% thread.  In my CAD program, I made a solid cylinder then moved a model of a screw thread into the center and subtracted everything contained in union of the two parts. Yes, it produced a thread, but it was exactly the same size as the model, so no room in any direction from the threads. It felt tight because it was. I need to think of a way to do that, but it started out as a "I wonder if I could..." project.

Following a path like a ping pong ball in a clothes drier, I ended up with a project that would be useful around the shop and fitted into some things I've been thinking of doing.  An adapter that would allow me to both test and use batteries from my Ryobi tools - all the 18V One Plus line, not their 40V line.  I found the design on Thingiverse, downloaded it and went through my process of turning it into a Gcode file to print.  On Thingiverse, designer nafis used an almost Ryobi green colored filament. 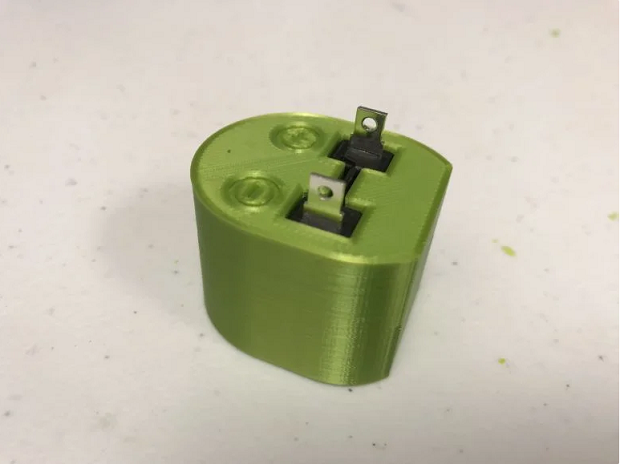 In case it's not obvious, this is two pieces; the green printed portion and a plastic piece with metal terminals in it.  That's a Ryobi replacement part, part # 300001044, which I bought from a seller on eBay.  The terminals are a rather tight press fit into the printed part.

The print turned out less than perfect but good enough. 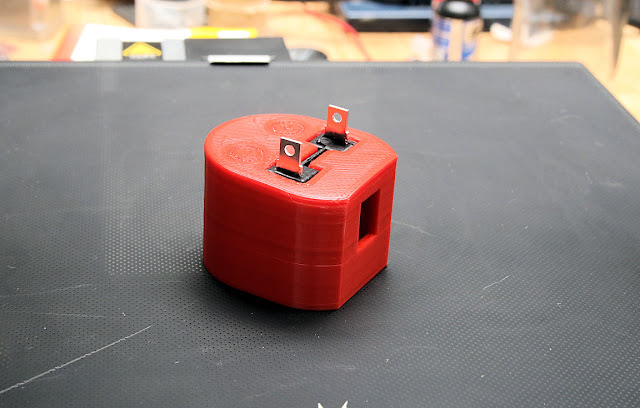 The flaw is that one corner area of the cap lifted off the bed, and the cap isn't flat, like it should be.  In this use, that absolutely doesn't matter.  Here it is as it's being used and you can see the taper on the cap better. 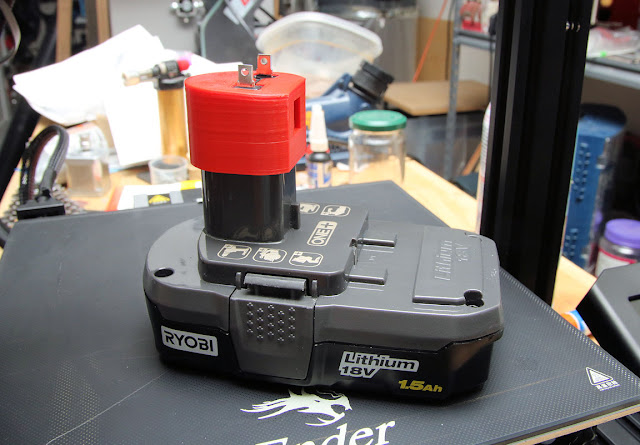 What do I do with this?  Aside from checking the battery capacities every now and then, when I look at the batteries I think of energy for when the grid is down, like after a hurricane.  I'd love to be able to get at that energy and the first step is getting onto those terminals.  In the case of trying to run something that runs of the 120V wall outlet, they make a product to do that for you.  I may well replace my aging 35AH AGM (sealed lead acid) battery with a handful of these tool batteries.