Celebration of the Momentous Day

There's a lot to talk about today.  The first and most obvious news of the day is the suborbital flight of Blue Origin's New Shepard suborbital rocket.

At 8:12 am local time in West Texas, about one hour after sunrise, Blue Origin's New Shepard launch system rocketed into the sky. The mission carried an eclectic mix of passengers—billionaire Jeff Bezos and his brother Mark, famed female aviator Wally Funk, and 18-year-old Oliver Daemen.

All four emerged from the capsule, in the west Texas desert, less than 20 minutes later. During the flight they reached an altitude of 107 km, crossing the internationally agreed upon boundary of space.

This was Blue Origin's first human spaceflight and follows Virgin Galactic's successful flight of its founder, Sir Richard Branson, nine days ago. We truly have entered into a new era of human spaceflight.

Since I talked about Virgin Galactic's flight, it comes with the territory to cover Blue Origin's flight.  BO has announced they intend to make another couple of suborbital flights before the end of the year, and that will have volumes to say about how well they'll be able to do multiple flights in a year.  We know that this capsule has made three flights this year (including this one) but I found no mention of more capsules ready to fly or the number of boosters that are available.  Both the capsule and the booster are recoverable, but whether they have one or a fleet, I don't know.  Eric Berger at Ars Technica speculates they might try for a many as a dozen such flights next year.

The number of seats available in a year will have a large bearing on the price space tourism can offer although their operating costs certainly create a price floor until some new technology comes along to change that.  The heady prices talked about for this launch are unlikely to remain.  That was $28 million for the auctioned seat - to someone who then said he had more important things to do and deferred to the second bidder who, in turn, handed off his ticket to his 18 year old son.

Over time, if the price gets down to where the trip cost gets close to the cost of a family vacation we will be firmly in that “new era of human spaceflight.”

Of course, the reason that Blue Origin chose this day for the launch is that it commemorates what I've taken to calling Peak of Western Civilization Day - which I got from Aesop at Raconteur Report.  He has his commemorative post up again today and it's worth your time to read. 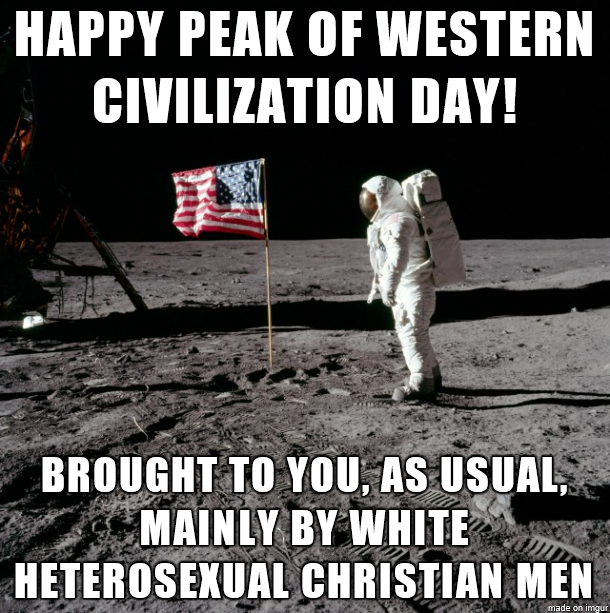 Like millions of people around the world, I hung by the front of the black and white TV that night; this one in my uncle's house in New York City, the last big vacation I'd take with my parents.  We watched intently but I don't recall exactly how much we saw or if we watched until 1:11 tomorrow morning when the EVA officially concluded.

It's a reasonable argument that everything we've done in space exploration since the 1960s has simply been refinement of what they did back then.

Yesterday won't challenge the 20th or Apollo 11 for that title, but it marked a new milestone for Starship and Superheavy at Boca Chica.  Booster 3 (B3) successfully static fired its three Raptor engines at a little after 7PM CDT.  This video is queued up to start just about 10 seconds before the burn.  As luck would have it, while working on the solar deflation article last night, I had another tab open and was listening.  I heard it, then went over to Lab Padre, rewound the video about 30 seconds and then watched it.  A couple of times.

Yeah, it was only three engines on a booster that will eventually carry 33, but it's still a goal along the way that checks off several "first ever" milestones.  Elon Musk says they "might" try to put nine engines on this test booster and try it again, depending on progress on B4, which is the one intended for the first orbital flight.

Finally, an article that's too long to summarize here, but space fanatics - especially those who care about the early days of the Mercury program - will find this article on Gus Grissom very interesting.  On July 21, 1961 - 60 years to the day ago when most of you will read this - Gus Grissom's Mercury flight ended with Gus barely surviving and his capsule being lost for decades.

When it comes to NASA history, July 21 may not have the same significance as July 20, the date when Buzz Aldrin and Neil Armstrong landed on the moon in 1969. But back on July 21, 1961, another pivotal moment in the evolution of human spaceflight took place when Gus Grissom splashed down in the Atlantic Ocean within a small Mercury capsule—almost drowning in the process. The lessons NASA learned that day and in the following weeks undoubtedly changed the course of human spaceflight.

More than half a century later, Grissom’s name has faded from memory. Shepard has the honor of the first US spaceflight, John Glenn made the first orbital flight, and Neil Armstrong stepped on the Moon. Yet after an all-too-brief career that ended tragically in the 1967 Apollo 1 fire, Grissom deserves recognition not as an unlucky footnote but as a genuine hero. And for today’s astronauts, Grissom's near-death experience in the Atlantic Ocean has renewed importance, offering a sobering reminder of the sea's peril as NASA plans to return its Orion capsule from deep space again by way of the ocean.

“Water is a great place to land in, but it’s a hell of a place post-landing,” Thompson told Ars. “Let me tell you, you can hurt yourself in the ocean.”

That'll keep you busy for a while.