Picture of the Weekend

Hat tip to Teslarati with an author I haven't seen before for a link to a SpaceX Tweet that featured a fortuitous alignment of Friday's Starlink launch from Vandenberg.  You can go to that Tweet link and watch loops of six seconds of video with this part near the middle as many times as you'd like.  Yeah, it's just a coincidence of the line of sight, but I've got to tell you lots of photographers strive for alignments like this. 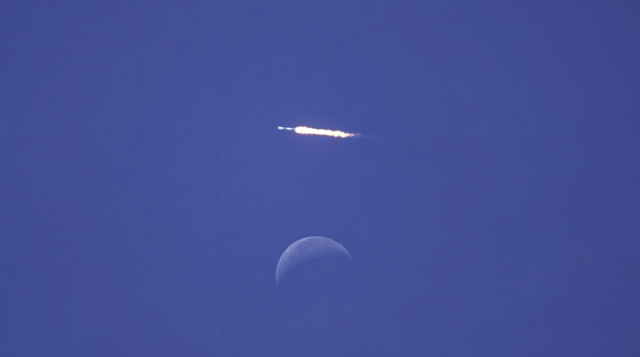 This morning's launch from the KSC didn't offer such views and especially not from here.  I was able to glimpse the F9 within the first minute after launch, through the branches of my neighbor's tree, but except for one bright spot climbing into the bright morning sky, which would have been easy to miss,  you wouldn't have guessed a launch had taken place.

Friday's and this morning's launches from opposite coasts marked SpaceX’s fifth and sixth Starlink missions for July, which were their 32nd and 33rd launches for 2022.  Those two wrap up July, with the next launch set for nine days from today, August 2nd, from launch complex 40 (SLC-40) on Cape Canaveral.