NRC Announces It Will Certify The First SMR

Whut?  The US Nuclear Regulatory Commission announced Friday (.pdf warning) that they will certify the Small Modular Reactor design from a company called NuScale.  The reactor is a first in an important class of designs; the SMR isn't built on the site of a power plant like the big reactors most of us have read about.  The small reactor is built on a production line that one would hope could allow some of the continuous improvements in quality and safety - not to mention the cost reductions - that we see in virtually every mass-produced item.  After manufacturing, it is shipped (presumably by truck) to the site where it will be installed.

The reactor design approval process began in 2016 (which is a different problem) and approval has reportedly been expected since 2020, when the SMR received its safety approval from the NRC.

The NuScale SMR is a 76-foot-tall, 15-foot-diameter steel cylinder capable of producing 50 megawatts of electricity.  The reactor is not one of the newer designs we keep reading about, like molten salts, thorium or something based on another radioactive isotope; rather, it's a pretty conventional steam generating design based on heat from uranium with control rods to absorb neutrons and reduce the heat.  The steam produced is maintained internal to the reactor, and their design features passive safety and fault tolerant design elements.

The design features a passive cooling system, which means no pumps or moving parts are required to keep the reactor operating safely.  The pressurized internal hot loop is arranged so that it allows hot water to rise through the heat exchanger coils and sink back down toward the fuel rods after it cools.

In the case of a problem, the reactor is similarly designed to manage its heat automatically. The control rods—which can encase the fuel rods, blocking neutrons and halting the fission chain reaction—are actively held in place above the fuel rods by a motor. In the event of a power outage or kill switch, it will drop down on the fuel rods due to gravity. Valves inside also allow the pressurized water loop to vent into the vacuum within the reactor's thermos-like double-wall design, dumping heat through the steel exterior, which is submerged in the cooling pool. One advantage of the small modular design is that each unit holds a smaller amount of radioactive fuel, and so it has a smaller amount of heat to get rid of in a situation like this. 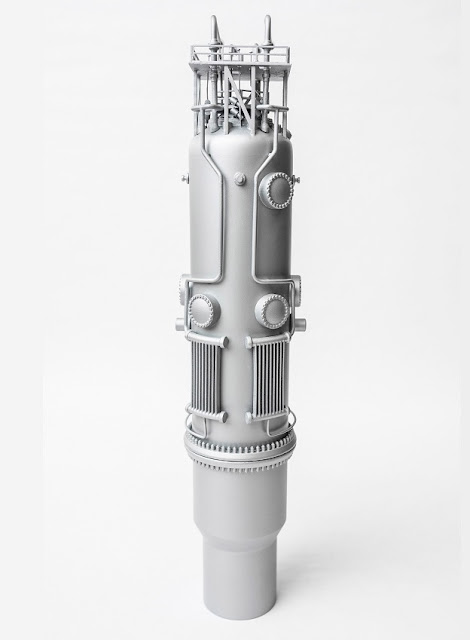 NuScale image of their SMR.

While it's a 50 megawatt reactor, they envision a plant employing up to 12 of these reactors in a large pool like those used in current nuclear plants, to generate 600 megawatts.

It's important to note that they're not done with the hurdles before these can be installed around the country.  The NRC has to approve the specific sites where any of these reactors are deployed.  Currently, one such site is in the works: a project called the Carbon Free Power Project, which will be situated at Idaho National Lab.  That has been scheduled to be operational in 2030 but has been facing some financial uncertainty.  As I'm sure you're noticed, the people who claim to be in favor of minimizing CO2 emissions are largely devoutly opposed to nuclear power.