A couple of things that have nothing to do with each other.  First something that just seemed funny - strange to me. 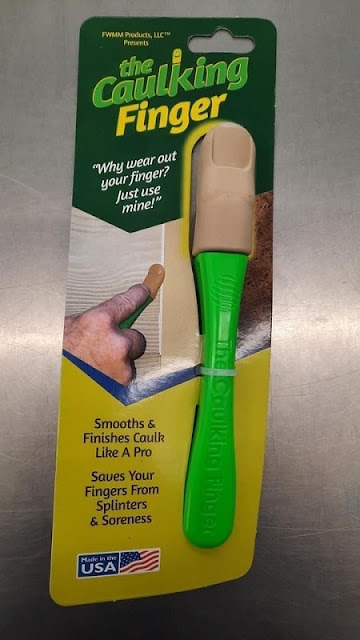 Yes, it's real, and no I don't have one.  I don't end up caulking things often enough to justify it.  Mark 1 finger works well enough, and I've never gotten splinters.

The hurricane cleanup was largely in a back corner of our property where my next door and back yard neighbor's trees had dumped on the workshop's roof.  The hazardous one is the back yard neighbors because they have an enormous tree that dropped a branch on the roof that was hard to get rid of, not just because it was 5' long and heavy but also because it was still attached to the rest of that tree.  I had to chainsaw a couple of chunks off it while standing on a ladder before I could drag it off the roof, then chainsaw that log into smaller pieces to carry to the curb.  The roof is cleared off, though, and there are no indications of roof damage.  It could have been much worse.

Next door neighbor has different trees, but the one that always causes hassle is her bougainvillea.  Pretty flowers but thorns big enough to kill a rhinoceros.  Mrs. Graybeard and I came in with matching scratches on our right arms from brushing against a branch.  You have to pick up branches very gingerly to drag them to the curb.  The surprise there is that I had four broken off thorns in my shoes after we finished and they didn't go through the soles of my running shoes and jab into my feet.

Cutting back the branches in that area took all day Friday.  Saturday I sat down to fix the antenna elements and ran into a supply issue - as in I don't have any metal I can machine into the parts I need to fix it.  I need to describe the situation and how I intend to fix it.

The antenna had one of its dipoles snapped off - the before picture is in Thursday's post.  The metal tubing that snapped was 5/8" outside diameter and the remaining broken-off parts sticking out of the antenna's boom are about 6" long.  Here's the after picture with the broken-off parts highlighted.  This was almost as soon as I cranked over the tower and it stopped raining. I've since sanded those broken tubes to shiny metal and sawed off their jagged ends. 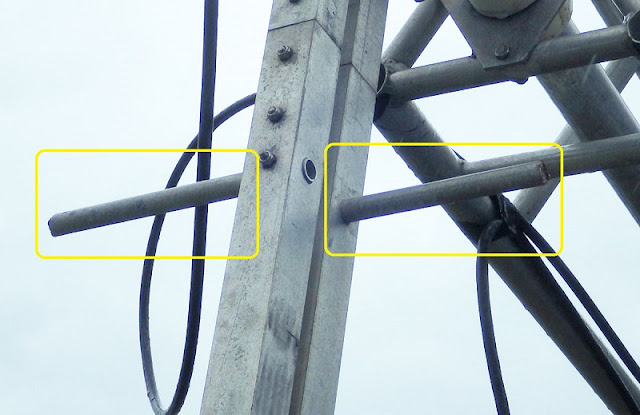 Think of a broken pipe plumbing problem.  A standard fix for a copper pipe is to clean up the ends and then silver solder a sleeve over both ends (quick example).  Since every joint in the antenna's elements is two pipes slipped into each other and attached with a self-tapping screw, I thought I'd machine a sleeve made of aluminum around 6" long to 5/8" ID.  As for the OD, 3/4" seemed natural but only the ID matters.  I figured each of those ends on the antenna boom and the ends of rest of the broken off elements would get about 3" of sleeve and I'll use two screws on each side of the break.

It turns out that 5/8" ID aluminum tubing isn't particularly easy to find. Another possibility would be to start with a 3/4" aluminum round bar, drill it on axis and then bore it to 5/8" ID on my lathe.  That's throwing out almost all of the bar, but sometimes you gotta do what you gotta do.  Unfortunately, I don't have pieces of aluminum that could be turned down to 3/4" and 4 to 6" long.  A 12" long bar is on order and will be here tomorrow.  It's possible I'll get the elements repaired in the next day or two.

As for mounting the tower and the house bracket, I will go to 1/2" x 3" long lag bolts for a short term fix just to get the tower up and out of the way.  The "real" long term fix (which hasn't been imagined yet) is going to be in a month or two; "when it cools off."