A few small stories - as we do from time to time.

Back in August we did a couple of pieces on "The One-Ton-Class Orbital Rocket Race."  In that piece we talked about a few companies who seemed to be nearing the point where they could try to launch for orbit in early September.  ABL Space Systems was the leader at that date, having filed preliminary papers to launch from Alaska's Pacific Spaceport Complex. The dates that appeared in documents from the Spaceport indicated potential launch dates of August 29 to 31, followed by September 6 - 10.

I see nothing saying that ABL made a launch attempt in that window.

We also talked about two others: Firefly Aerospace and Relativity Space.  Firefly joined the small, select group that can launch to orbit last night at Midnight PDT from Vandenberg Space Force Base.  Everyday Astronaut was chosen to cover the launch live, and Scott Manley did a  followup video later.  Scott Manleys' video is under 9 minutes long, Everyday Astronaut's video is over 3-1/2 hours.  The live action coverage of the launch starts at about 1:53:00 into the longer video, and in the comments, Tim says "Replay of liftoff cameras here- 3:16:49 / 13:17:48 ."  Rest assured that should be 3:17:48 - the video isn't over 13 hours long. 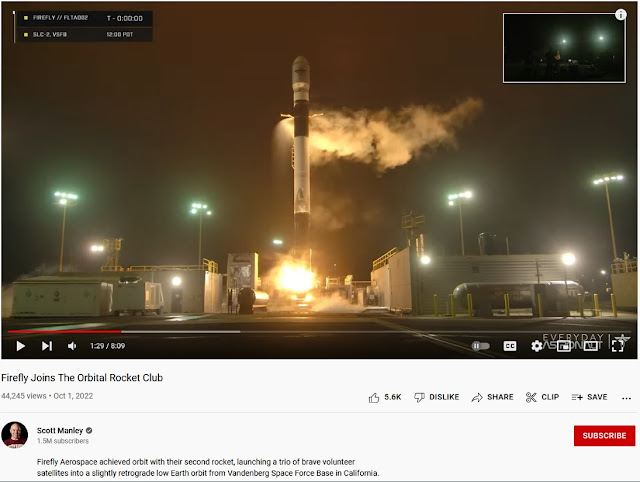 Congratulations are in order to Firefly and everyone there involved in making it to orbit. To invoke the saying that, "Space is hard; Orbit is harder."

With the Space Center cleaning up and recovering from Tropical Storm Ian (as it was when it hit there) we're looking at a busy few days of launches that were postponed by the storm.

An interesting side note for the Intelsat mission is that this Falcon 9 first-stage booster will be making its 14th launch, only the second Falcon 9 to reach that reuse milestone. This marks the first time a SpaceX rocket has flown a purely commercial payload on its 10th flight or later; until now, all of these "fleet leader" missions have been exclusively SpaceX business - Starlink. This strongly suggests that the commercial satellite market is becoming increasingly comfortable with SpaceX's refurbishment process for even well-used rockets.

NASA announced on Friday that Artemis has decided to forego an attempt to launch in October and will instead aim for the launch window that opens in mid-November.  As I mentioned at some point about this mission, the preferred launches have always been in the dark green-coded days, which are longer missions than the light green-coded days.  There is only one dark green day in November, the last Sunday of the month. 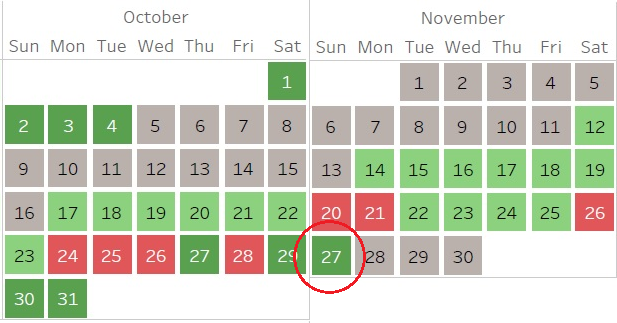 This can only mean one of two things: either the only date they'll prepare for is November 27th, or they'll settle for a shorter duration mission.

It's worthwhile bearing in mind that the Artemis/SLS and Orion capsule have been stacked for 11 months, and it's prudent to start going through any limited-life items like those Flight Termination System batteries, and perhaps stored fuels for the Orion capsule's thrusters to ensure they're still usable.

In the coming days, engineers and technicians will extend access platforms around the Space Launch System rocket and Orion spacecraft inside the Vehicle Assembly Building to conduct inspections, and start preparing for the next launch attempt, including retesting the flight termination system.