When we last talked about the TROPICS mission, its future didn't look particularly good. The problem was that TROPICS was to have been a constellation of six radar satellites and two of the six were lost in June when Astra's rocket failed to achieve orbit.  NASA predictably tried to assure everyone the mission could be done with 2/3 of the capability on orbit but that sounded optimistic.  The remaining four satellites were all to be launched by Astra and the company had achieved orbit twice out of nine tries.  That's just 22%.

This past Thursday, Astra announced in a rather roundabout way that they will not launch those satellites, leaving the rest of the industry to wonder how those four small satellites will get to orbit.  By roundabout, I mean that Astra said,

Astra and NASA have agreed to modify the terms of our existing launch services agreement for NASA’s TROPICS mission to allow for the future launch of comparable scientific payloads on version 4.0 of Astra’s rocket. We are delighted to maintain our strong partnership and to have NASA as a launch customer on the next version of Astra’s rocket. [Italics added: SiG]

"Future launch of comparable scientific payloads" doesn't describe what those payloads might be, nor precisely what the phrase means.  They're delighted to maintain their relationship with NASA, but the agency could simply say that any given satellite that might be asked about isn't comparable.  That could be defined as "practically identical."

Just about two months after the loss of the mission carrying the first two TROPICS satellites, Astra announced they were pivoting away from their business model up to that point and going into development of that Rocket 4.0.  Until that point, Astra's approach was to assume customers would be willing to sacrifice a bit of reliability to save on launch costs.  As I said at the time, potential customers probably envision something like dropping from 99% reliability to 90%, not 22% like this.  The question, of course, is whether Astra can pull this development off.  Not just the funding (which is easier to get information on) but the talent pool. We know they say they've tripled the size of their workforce; we don't know if the people hired can accomplish what Astra needs.

It's long been said that some sort of shakeout in the small satellite launch business seems to be inevitable.  There's a lot of competition worldwide; the size of the rising European launch industry surprised me in July, and that's just Europe.  On top of that, there's not much money to be made carrying the small payloads that colleges and small companies can afford. 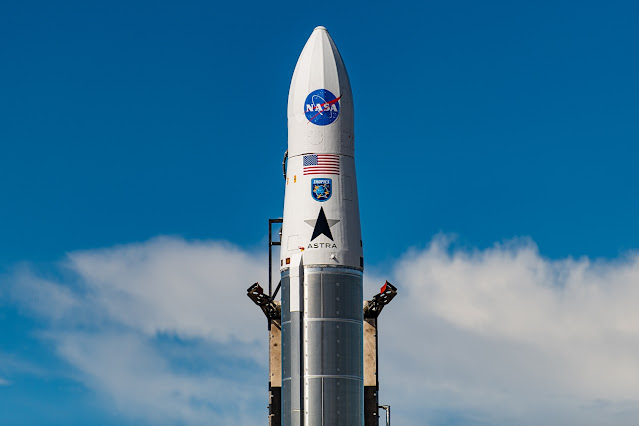 The Astra vehicle that failed in the previous TROPICS mission was Rocket 3.3, pictured here.