That isn't really what the source article for this piece is about.  The article, H/T to Ars Technica and Eric Berger, says, "SpaceX has been bidding against itself for NASA’s science missions for a while."  The story talks about NASA having just closed bids for the launch of an upcoming Earth science mission to measure changes in sea level, called Sentinel-6B.  Bids are treated as if they were classified and not shared with the media, which you'd most likely want if it was your business bidding.

Then Berger says a couple of surprising things.  To begin with, it's a pretty safe bet that Sentinel-6B will ride the same rocket to orbit that its sibling rode, a Falcon 9.

This is because, at present, there are no other bidders for NASA's medium and large science missions beyond SpaceX and its fleet of Falcon rockets.

The secrecy of the bidding process means NASA won't tell you this, but it doesn't mean the information isn't available for people looking for it.  Especially in the age of Twitter and using it to promote your business.

However, it seems likely that at least the last three awards under NASA's Launch Services II contract have all seen SpaceX bidding against itself. United Launch Alliance chief executive Tory Bruno confirmed this after NASA's announcement in September 2021 that the GOES-U satellite would launch on a Falcon Heavy rocket. Bruno said his company had "withdrawn" its bid after all of its Atlas V rockets were sold out. 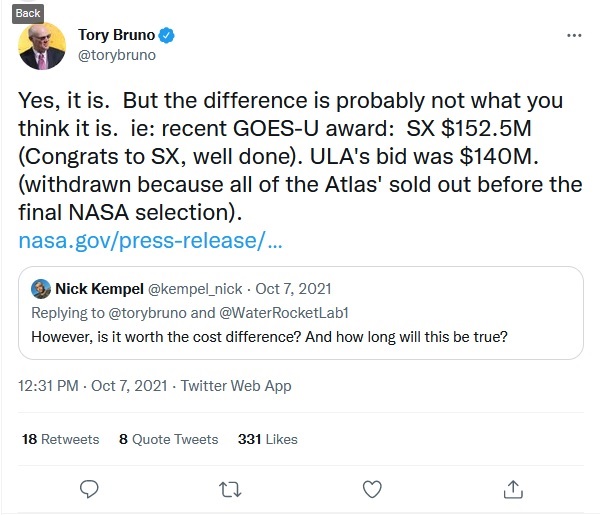 If someone is following Tory Bruno for news from ULA, they saw immediately that they had withdrawn their bid to launch GOES-U despite NASA not revealing that SpaceX was the only bidder.

Since the middle of the 20-teens, NASA has been pursuing the Commercial Launch Services businesses.  When some program in NASA or NOAA wants to find a launch vehicle, they contact NASA's Launch Services Program (LSP), the office charged with providing "safe, reliable, cost-effective and on-schedule" launch services.  That need for a launch provider uses a list of the approved launch vehicles that they maintain.  It turns out it's a fairly small list. 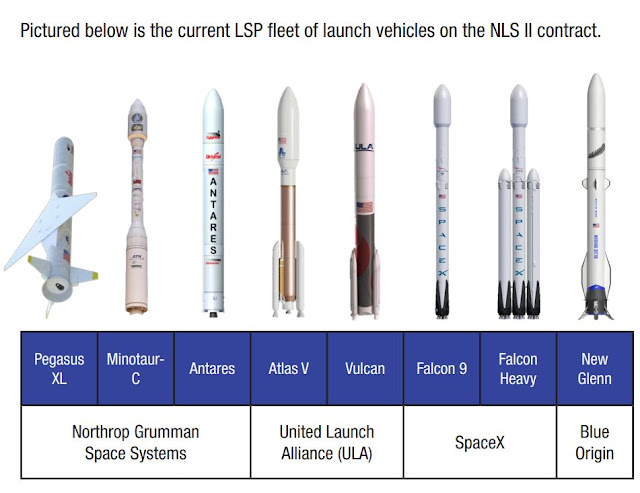 This graphic is taken from a brochure that the LSP provides.  The problem with this so-called fleet is that very little of it is real.  New Glenn and Vulcan have never flown and LSP rules state they must have one successful flight to be included.  Atlas V has sold out its launch manifest and is not available for new launches.  The problem extends to the left: the Antares rocket is unavailable for science missions because it relies on Russian engines and will soon be retired.  Of the other two, Northrop Grumman's Pegasus rocket has flown just one science mission in the last five years for NASA, a mission lifting such a small payload (281 kg) that Firefly could carry it if they were approved, and Northrop's Minotaur-C rocket has failed on its last two NASA launches, in 2009 and 2011.  With their last missions that long ago, they almost certainly will never be selected again.

The Launch Services Program does have an alternative contracting method—which, delightfully, appears to be named after Darth Vader. The Venture-Class Acquisition of Dedicated Rideshare, or VADR, contract has allowed NASA to procure launches from companies with smaller rockets, including Rocket Lab, Virgin Orbit, Firefly Aerospace, and Astra. These contracts cost far less, usually about $10 million, and are for CubeSats or slightly larger spacecraft willing to accept higher launch risks.

This means that for the foreseeable future, SpaceX is the only game in town.  Coming NASA science missions will be flying Falcon 9 or Falcon Heavy, like the Europa Clipper and Nancy Grace Roman Space Telescope are scheduled to now.

NASA also has some big science missions that will need rockets soon, including a lander for its Mars Sample Return mission (launching in 2028), the Dragonfly mission to Titan (2027), and the NEO Surveyor to look for killer asteroids (2026). The agency has not said whether it will wait to award these missions until such time as competition is available.

Competition from SpaceX has been good for NASA. During the last decade, as SpaceX developed its Falcon 9 rocket and became eligible to compete in NASA's Launch Services II contract, there has been a downward trend in launch costs for NASA's science missions. Officials said there is no evidence that is changing, despite the lack of competition.

That last paragraph says it all.  Despite the single source for launches, there's no evidence that the agency is paying more for launches.