It was getting close to being a pretty clear conclusion back in December of 2020 when we were reporting that the White House was asking congress to remove the requirement from the Europa Clipper mission that the satellite must fly on the Space Launch System (SLS).  Last Friday, NASA made it official by announcing that SpaceX Falcon Heavy has been selected to launch the mission.  The current launch date is projected to be October 2024.

The White House points out that a private sector rocket, such as the Falcon Heavy, could get the Europa mission to the Jovian moon it's targeting although the mission would take longer.  The trade off is that the Falcon Heavy would save NASA $700 Million, which could be used on other priorities, and moving the mission off the SLS would save one of those rockets for the Artemis moon missions.  When you combine the savings of launch cost for the Europa probe with having an "extra" SLS booster available, the savings climb to $1.5 Billion.


The extra lift capacity of the SLS would allow a direct flight to Jupiter, taking around three years.  The Falcon Heavy would add a requirement for one or more gravitational slingshot maneuvers, and add years in deep space before the probe gets there.  This has been rather normal for launches to outer and inner planets in the past.

Switching to the Falcon Heavy, which has only had three missions to date, is going to save taxpayers some serious money.  Teslasrati SpaceX correspondent Eric Ralph reports that the six metric ton (~13,300 lb) spacecraft will instead launch for less than $180M.  That's considerably less than the cost of two of the four main engines on the SLS at $146M each.  Had Falcon Heavy not been ready or NASA shied away from the challenge of switching launch vehicles, sending the ~$4.25 billion orbiter to Jupiter could have easily added more than $3 billion to the mission’s total cost. October of '24 is years before an SLS flight would have been available for the satellite, although the longer flight time is likely to offset some of that.

Switching over to a six year old post on Ars Technica, we get both some of the interesting history of the probe itself and interesting information on Europa.  Just a couple of paragraphs to tease the article:

Jupiter showers its moon Europa with enough radiation to kill a human in just a few days. Europa must also contend with the massive planet’s powerful tidal forces. The moon literally creaks as Jupiter’s bulk rends its frozen surface in deep crevasses, pushing and pulling the ice upward and downward by tens of meters every few days. And with only a very tenuous atmosphere, it is so very cold: -210 degrees Celsius.

Yet as forbidding as Europa’s surface may be, just a few kilometers below lies the largest ocean in the known Universe. It dwarfs any on Earth, encircling the entire moon and plunging as far as 100 kilometers deep. The tidal forces that wrench Europa's icy surface also tug on the core of this ocean, dissipating heat and providing ample energy to warm the ocean.

Outside of Earth, many astrobiologists say Europa’s vast, dark ocean probably offers the best hope for finding life elsewhere in the Solar System. For these scientists, Europa beckons like the sirens of a Homeric epic.

Of course, everyone who saw or read Arthur C. Clarke's 2010, is probably remembering or reciting the message at the end of the movie, where aliens warn the crew: “All these worlds are yours except Europa. Attempt no landing there.  Use them together.  Use them in peace.” 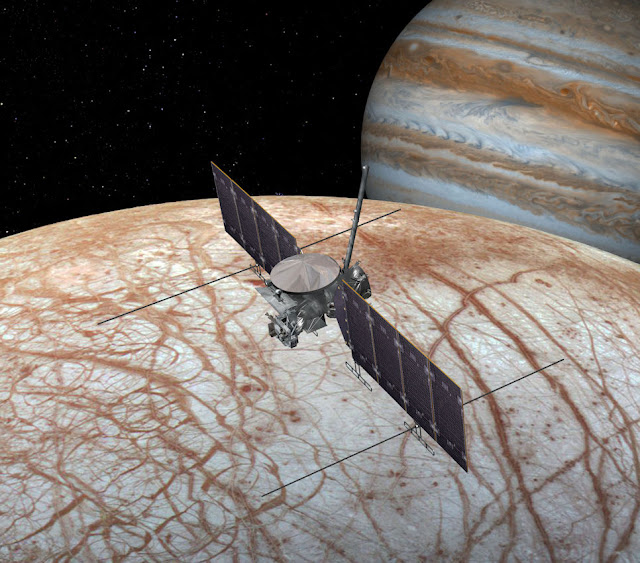 JPL rendering of the Europa Clipper with the frozen moon below it and Jupiter behind, upper right.