Getting Started on the 1 by 1

Just about two weeks ago, I showed a Solidworks (CAD software) rendering of the new engine I'm working on building.  Since Brian's name for the engine is a little long, I've been shortening it to the "one by one" and leaving off "vertical IC engine."  I've started out on working on it, but haven't cut any metal yet.  First, I had to buy some metal.  I had some of what I need, really more than I thought I'd have, but I've done some shopping and gotten in some raw metal.  My standard approach is buy about twice as much as I think I'll need, but sometimes even more than that.

The next problem is that while for most parts, I can use the simple drawings and make the parts manually, for other parts, I need to create solid models for CNC.  Brian provides pdf copies of drawings for all the parts when he sells plans.  It's very well documented, but pdf files make poor CAD exchange formats.  My CAD program, Rhino3D ver. 5, reads lots of different formats, but when I built the Webster last time, those plans were AutoCAD .DXF format files, which have become an informal standard supported by lots of programs.

Rhino reads .DXF files very easily.  It says it will read Acrobat .pdf files, and it will sorta kinda read them, after a fashion.  It doesn't import the numbers from dimensions, just the lines near the dimensions; it doesn't distinguish between hidden and non-hidden lines; when it imports straight lines, those will dimension easily, but when it imports circles or portions of circles, those won't dimension at all.  The portion of Rhino that is supposed to dimension the circle's radius or diameter doesn't even know that a circle is even there.

I have a handful of excruciatingly complex parts that I need to turn into solid models, so this is going to be a Big Deal.

As a test/experiment, I imported a moderately complex part.  It's simple in just having a constant thickness, but complex in that every external dimension is a radius.  To give a flavor for what I'm talking about, while removing the critical dimensions, this is a clip from the pdf. 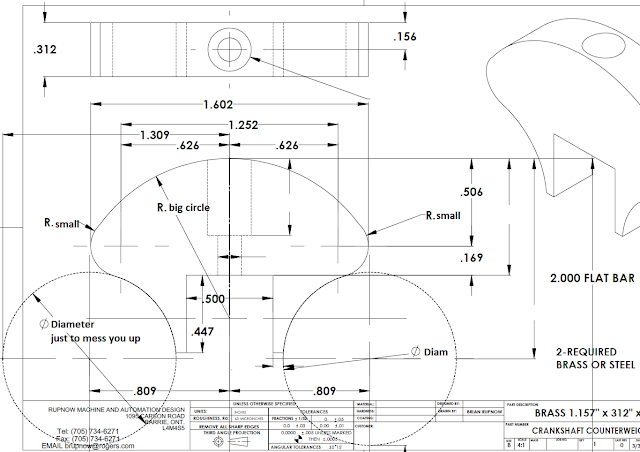 I deleted all the leader lines toward dimensions that didn't import, converted what should have been hidden lines, and turned it into solid model.  It worked surprisingly well for this shape.  As a gross test, I printed it. 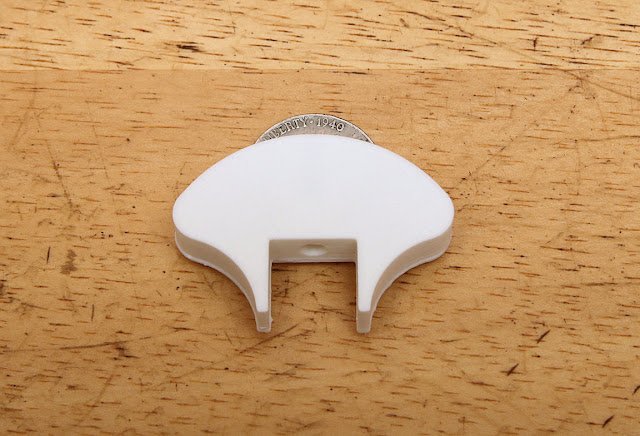 It printed well - it printed better than it photographed when I laid it on an old nickel.

Now the question becomes how to machine it.  Brian works entirely manually, and this is done on a rotary table.  If you look closely at the drawing, you'll find five little cross hairs marking the center of five circles that the rotary table would rotate around.  I think each one of those circles is creating a separate setup on the mill.  After those five setups there are two more: one setup to cut out the rectangle in the base and another setup to drill one through hole with a counterbore.  Seven setups for one little part.

Creating that rectangular cutout in the bottom will be done second to last.  Starting with a roughly 2" square piece of solid steel, I'll drill a hole through it which will become the position of the cross hairs in that cutout.  My drawing has the center of those cross hairs as X=0, Y=0.  I'll mount that to a tooling plate, assign the center of that hole to be 0,0, and just carve out the outline.  That's using what CAM programs call "waterline" cuts: constant depth passes around the shape.  Once the outline is cut, I'll stand it up in a vise, and cut out that 0.500 wide by 0.447 deep rectangle.  After that, there are two holes, one to drill and one to counterbore.  It goes from seven setups to three.  I should be able to try this out tomorrow.

It's hard to visualize the final shape based on looking at the waterline cuts, but this is what the toolpaths look like in the GCode proofing program I use.  I'll re-verify this in the CNC controller SW tomorrow, but they generally agree on cuts like this. 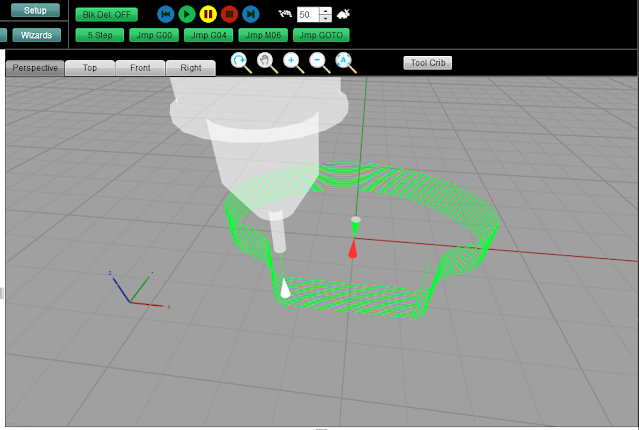