I had two main things I was doing in the shop this week and neither of them involved cutting metal.  Or cutting anything else.

The first was an improvement for my 3D printer.  Over the course if this year, while talking about the 3D printer I added at the start of the year, I've talked about wanting to get control over things that aren't available in the canned user interface it comes with.  I'm talking about things like setting control over the steps per inch so that I get finer control over the part size, the ability to command the extruder to spit out some molten plastic, or retract the filament.  These are low level control things but routine for my other CNC tools using Mach 3 to control them.

After spending some time researching alternatives, it looked like the software I wanted is the one called Pronterface (don't ask me why) which is available for a PC or the Linux-based Raspberry Pi.  As luck would have it, I have both platforms available.  I have a small Windows computer called an Intel NUC that I've used to run my Computerized Battery Analyzer, and the "nuke" was right there in the shop. I also have an older Pi (version 2) and while they're currently offering several newer versions, the one I have would probably work.

I decided to grab the NUC and immediately got into a wrestling match with Windows 10.  I should have known.  To make the long story short it took a couple of days to get that to work.  Hours upon hours of those days were waiting for Windows to stop doing shit so I could do what I wanted to.  With machines that aren't on regularly, Windoze 10 is a giant Pain In The Ass - calling home and tying up the machine literally for hours over my WiFi network.

Work on the 1 by 1 involved converting drawings into solid models.  This is tedious work and while I expect I'll get faster, the first part took about eight hours over a couple of days.  When I import the drawings into Rhino, it's as a pdf file.  The drawing has several views, and most drafting systems start with a Top, Front, Side, and perspective drawing.

In the first part I was working, it was different on every side, so there were seven views.  For the first step, I'll take the overall outline shape of the part and extrude it into a 3D solid with no holes in.  This results in the shape overlying the view I started from, and on top of the drawing sheet, so I lower it below the drawing, with its top just below the plane of the drawing.  Then I use the details of the view to tell me what holes need to be added or what needs to be milled away.

At this point, this drawing of the part is "Work in Progress."  I had finished the part by putting it under this Section View and adding at least one hole. 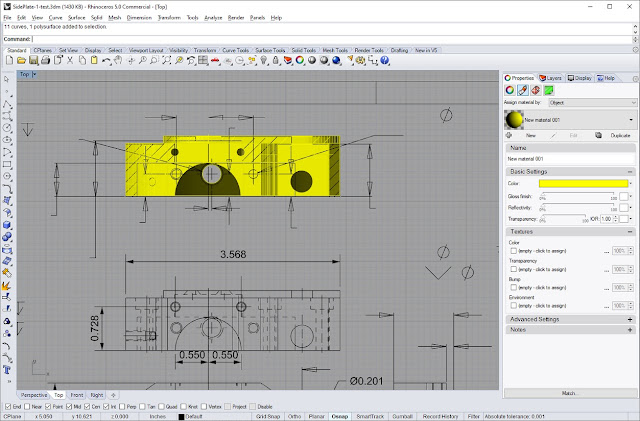 You'll note there are no dimensions on the view where the part is currently sitting.  This is the issue with the way Rhino3D imports the pdf files; it drops all the dimensions and notes (I added the dimensions you can read).  So I <ALT> <TAB> back and forth between the drawing and this view when I need to.

This doesn't do much to show you what the part looks like, so here's a better view of the finished, rendered part. 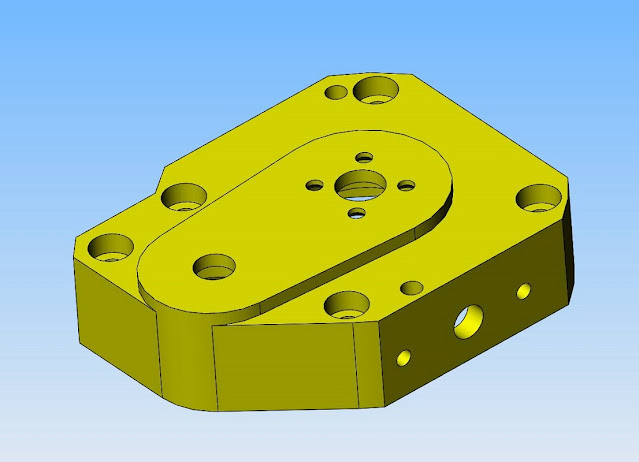 The back side of the part is largely hollowed out in a couple of large cylinders.  This is one side of what ends up being the crankcase. It holds enough oil so that the crankshaft spins the piston connecting rod through it and splash lubricates the moving parts inside.  That larger hole on the right side in this view gets the 3/8-16 threaded oil drain plug.

I need to make the model of the other side, and it seems like the best way to machine this is to cut the outlines and then bond them together.  It's easier to drill some of the through holes with the two sides together.  You can see five holes with a counterbore clearance holes on this side; these line up with smaller holes on the other piece, sized to tap for the five #8-32 Socket Head Cap Screws.  So you bond the parts together, drill the smallest diameter holes in those five places, then drill the clearance holes on this side finally adding the counterbore.  It may be best to do as much as possible with the two pieces together.