The "Student Debt Crisis" As The Typical Government Mess

Today was one of those convergence days.  First Peter over at Bayou Renaissance Man did a piece on "The student loan time bomb," then later in the day, the Foundation for Economic Education (FEE) daily email brought a story on how taxpayers end up paying off the insane debts of graduate programs at elite universities.  It was clear student loans were going to be the topic.

When I say typical government mess, what I mean is that the government creates the problem, makes the problem worse regularly for years, and then eventually creates an even bigger mess by "solving" the problem.

It's arguable that the root cause of the spiraling tuition rates isn't exclusively the Fed.gov's fault.  The Fed.gov has definitely enabled the problem and made it worse by providing virtually unlimited loans.  The reason I say it's not all on them is because if there was no market to sell those student loans to, tuition wouldn't be perpetually going up about 3x the regular cost of living.  I've done many deep dives on this issue over the years, and a good, recent piece (2019) is here.

The aspect that's rarely talked about is that making student loans go away is by far going to be giving more money to graduate schools and therefore professional schools than the middle-class kids getting a useful bachelor's degrees.  The average student loan balance for bachelor's degree holders is $37,000.  That pales in comparison to the things the FEE article talks about.  They begin by citing an article in the Wall Street Journal and excerpted at Tax Prof Blog.

Columbia and other wealthy universities steer master's students to federal loans that can exceed $250,000. After graduation, many learn the debt is well beyond their means," notes the Wall Street Journal.

The Journal reports on Columbia University's Master of Fine Arts Film program, one of the worst examples, in an article titled "Financially Hobbled for Life: The Elite Master's Degrees That Don't Pay Off":

The article focuses on the Master of Fine Arts in film from Columbia university.  The median debt of the students who took out federal student loans for this program was found to be $181,000.  The median income of those students two years after graduation was $30,000/year.  The taxes from everyone; the people who never took a day of college, the veteran going on GI benefits, and those bachelor's degree holders with $37,000 in debt will be going to pay the debt of these MFA holders with $181,000 in debt.  Sound fair?  Equitable?

Meet James Stoteraux.  Mr. Stoteraux is one of those Columbia MFA students but with two things about him that make him stand out from the crowd.  The first is that he didn't complete his MFA; he's two credits short.  The second thing is that the reason he didn't graduate is that he actually got a job in the film industry.  I'll quote him here:

"There were 55 students in my incoming class at Columbia’s MFA Film program. Only 4 of us ever managed to make a career out of it. And of those 4, one guy dropped out the first semester. Funny enough he’s the most successful one having co-directed Avengers Endgame."

While Stoteraux's story is interesting, the point of this article is how "to err is human but to really screw things up requires government."

But as Ian Lamont of Lean Media observes, "a graduate financing program enabled by Congress ~15 years ago basically lets Columbia charge whatever it wants and get paid up front. Students are on the hook for hundreds of thousands; if they can't pay it off taxpayers are on the hook."

Even students who can find jobs after graduating often dump much of their massive student-loan debt on taxpayers. Once out of school, the students enroll in an income-based repayment program, in which the federal government forgives all loans after 10 or 20 years. This “Pay as You Earn” program allows eligible student-loan borrowers to cap monthly payments at 10 percent of their discretionary income, and have their remaining federal student loans forgiven after 20 years — or just 10 years, if they go to work for the government.

First of all, note that students are only required to pay 10% of their "discretionary income." How much is that?  If those MFA holders from Columbia with a median $181,000 in debt and $30,000 income are maxed out on all their other expenses, what's their discretionary income?  I can't imagine it being as much as a full 10% of their income or $3,000 per year, but it's clear that if they paid that much for 10 years, they don't get within a light year of paying off that debt (don't forget that loan will accumulate interest charges as they're trying to pay it off).

That last part about the federal student loans being forgiven after 10 or 20 years means a few things.  First off, everyone knows there is no government money; there's only taxpayer money.  That means you and I, those already-mentioned bachelor's degree holders who are paying their own $37,000 in debt, and those student loan holders who already diligently paid off their own loans, will pay for those absurd graduate degree loans.

Second, it means these graduate programs are an absolute gold mine for the colleges.  Their programs are in demand, they can charge whatever they want, get the tuition right now and don't even have to care that eventually the loans get paid off to whatever institution is loaning the money.  Which means those programs aren't going away any time soon. 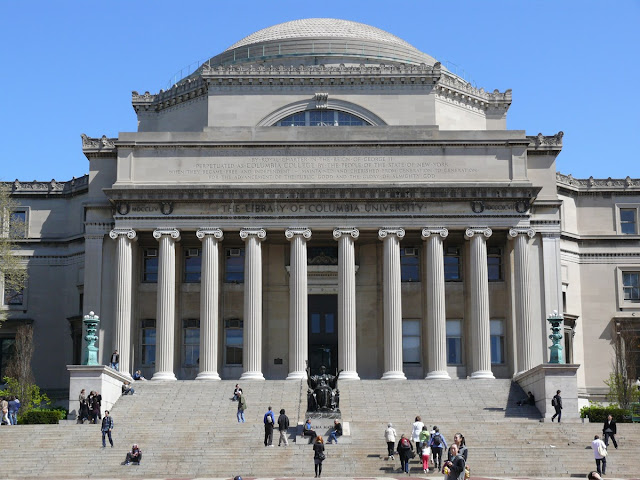 The library of Columbia University - from the FEE article