Back near the end of June, we introduced the Russian replacement module for the International Space Station, named Nauka (science).  The module didn't launch by the "No Earlier Than" date that was given at the time, but the mission successfully launched on July 21.  There were early reports of troubles with the Proton booster's upper stage, and the first planned burn to raise the module's orbit was delayed.

Sources said Russian ground teams were evaluating issues on the Nauka module soon after its launch Wednesday, prompting managers to forego the mission’s first planned orbit adjustment burn. The issues were not expected to be a major concern for the module’s rendezvous and docking with the space station.

The problems were resolved and Roscosmos ground controllers successfully raised its orbit slowly until it was able to rendezvous and dock with the ISS.

Nauka is to replace the Russian Pirs (Pier) module, which has been part of the ISS for 20 years, so the module was undocked from the ISS on the 26th and then set on path for a destructive re-entry with a Progress Cargo Freighter providing the deceleration.  Here's the two of them as seen from the ISS. 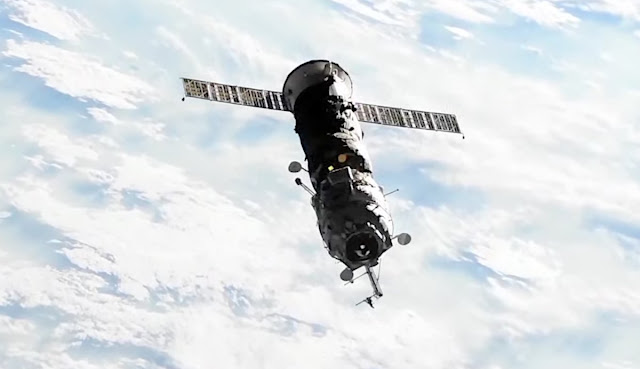 The Nauka module arrived at the ISS yesterday, the 29th, and the docking took place at 8:31 AM CDT (13:30 UTC).  There are two Russian Cosmonauts on the station, Oleg Novitskiy and Pyotr Dubrov, and the two were assigned the process of  “waking up” Nauka and integrating the new spacecraft with the station’s systems.

The process was apparently going nominally until just over three hours later; 11:34 AM CDT when the Nauka module's maneuvering thrusters unexpectedly started firing.  The ISS is nothing if not enormous, stretching the length of a football field  with a mass of more than 930,000 pounds, but in the microgravity of orbit, small amounts of energy injected turn into movement, which turn into changing the position - the attitude - of the ISS.  The space station ended up tilted up about 45 degrees from its normal, intended orientation, moving at roughly half a degree per second at one point.

Attitude control was fully lost at 11:42 am, and engines on the space station's service module were fired. This was followed by a handover to the Russian Progress vehicle attached to the station, which began to fire its thrusters. This tug-of-war offset the Nauka module thruster activity, which eventually stopped after fuel supplies were exhausted. By 12:29 pm on Thursday, attitude control was restored. It made for quite an hour on the ground and in space.

A video summary from Space.com is here.

Just as there are standard procedures, some automated, for restoring loss of proper attitude, there are procedures for the aftermath and in "an abundance of caution," today's launch of Boeing's Starliner test flight was ordered held until Tuesday.  Starliner, of course, is heading for the ISS and there's perhaps a bit more concern than usual to verify everything is nominal on the ISS.