I'm going to try to keep numbering these sequentially.

This week's emphasis was finishing the 3D models of the two side plates and trying to envision how they should be machined.  Creating the model of the second side plate was tedious, but didn't involve any new things to learn.  It's a mirror image of side 1, so I started by making the mirror image of what I had, and then changing the features I had to.  That was primarily filling in all the holes that join the two halves together and creating new holes centered on the same places but smaller in diameter.

I have the original builder's notes on how he approached building it, but since he did it entirely manually and I'm going to do it via CNC, it might not always make sense to do it the way he did.  It is, however, a good starting place.  If you look at that rendering of side 1 in that link above, you can see that there are two large holes that are the major features of each of the plates.  They eventually house ball bearings for the two shafts they carry.  The big hole has a diameter of 0.425 while the smaller is 0.375.  What the designer did was not make the big one the final size, but drill and ream it to 0.375" and use a drill rod that size to ensure the holes are aligned in the final shapes.  That seems like a good idea.

I think that I can cut the outside profile of the two sides so that when they go together, the holes will line up.  I need to hold them down on a fixture to cut the outlines, and the raised area on the surface.  I started by taking an aluminum plate that measures 6" wide by 12" long and cutting off a slice a bit over 4" long (6" by 4") and then cutting that in two equal-sized halves.  Then I printed actual size pictures of the top view of both sides and taped them to the stock.  I punched a spot on both sides to mark what his drawings call (0,0). 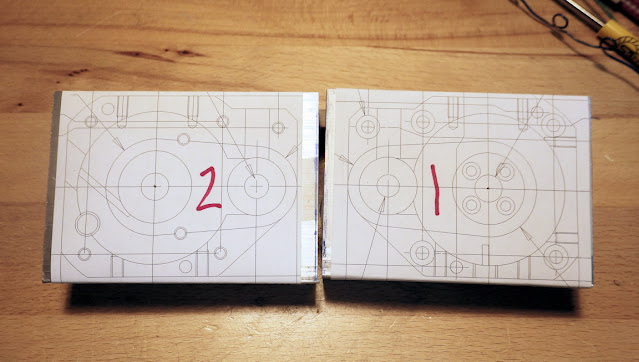 I put #1 in the mill vise and carefully centered a center drill on the cross hairs - over the spot that's marked on the metal.  I drilled a clearance hole for a 5/16" - 18 thread bolt, then moved left to put the center drill over the cross hairs on the left, and repeated drilling the same size hole there.  Once that was done, I removed plate one and put plate two in the vise, and started over.  After all that, I was left with this: 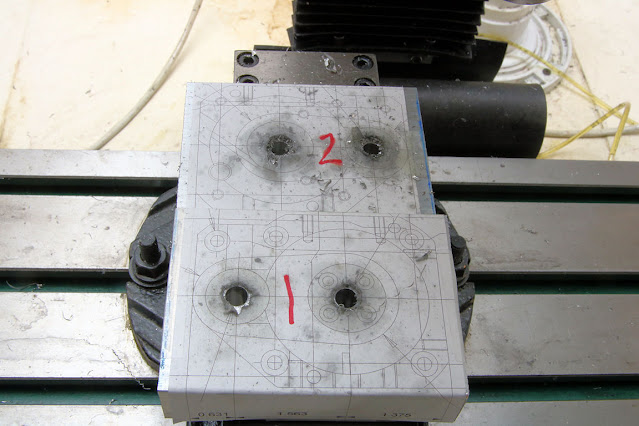 Next, I took the vise off the mill, cleaned up everything, and put the 1/2" thick aluminum plate I've been using for a couple of years on the mill table.  I kept the Y axis zero where it was because it lines up over that middle channel (you can see the bolts holding the vise down coming from that slot), and used the position the mill table was in as X for the left hole on side plate 1.  The next step was to drill and tap two pairs of holes so that the spacing between them is the required distance (1.563") and separated the two sets of holes so that the two chunks of aluminum are an inch apart.  That's enough so that an end mill can go between them without hitting something I don't want to cut.

As a final test, I mounted the two pieces as if I was going to cut their outlines.  When it's time to cut them, I'll probably re-mount them with some shim stock under them so that the cutter can cut them free without cutting up my plate.  It's bad enough the plate has marks from other builds and a large number of seemingly randomly spaced, threaded holes. 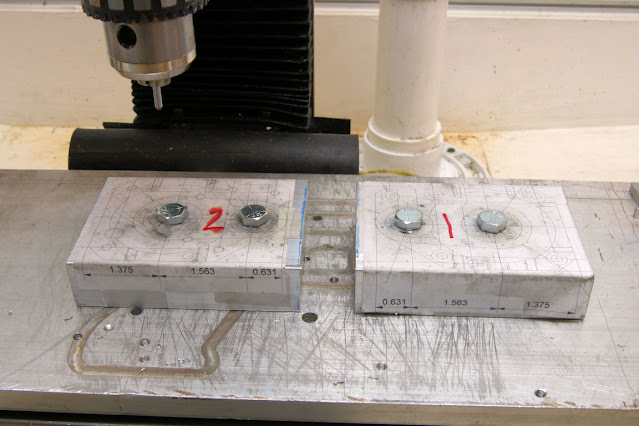 Tool paths are the next hurdle.  Looking at this now, I think I could create a program that would cut out both sides in one long operation.  I'd need to know the distance between the two parts to about .001" - less error would be better and I'm not sure I do.  An alternative would be to use the same (0,0) point that the designer did, use two tool path files and reset the (0,0) point in the CNC controller between pieces.