Last Sunday evening, I posted on the engine I'm starting on (the 1 by 1) and in particular, a moderately complex little part that I need two of, the crankshaft counterweights.  It's an odd geometry with almost every dimension defined by the outlines of three different circles; there are only three straight lines in the design, not counting one drilled hole.

I completed them today, and it's on to picking the next part to do and starting that.

I saw a way to cut out the outlines of both parts from one piece of steel which allowed me to do both parts with the same fixture.  My tool path was designed around using a 3/8" end mill to cut the outline, so by using CAD, I could see how far apart to mount the two parts so that I could cut two in succession.  It wasn't until Wednesday that I could start the cutting.  Between Sunday and Monday, I cut the 6" long by 1-7/8" wide strip of steel from a larger piece then cut it to size and had to reduce it's thickness from 3/8" to 5/16", by taking about .032 off each side.  Except having been messed up by using single cuts and not being a job shop that has to do each piece in the minimum possible time, I took smaller cuts and did more of them.

This shows the two pieces right after cutting them out.  I like to say it came out almost as if I knew what I was doing.  It was kind of cool watching the cutter cut the one on the right out of the steel without touching the one on the left. 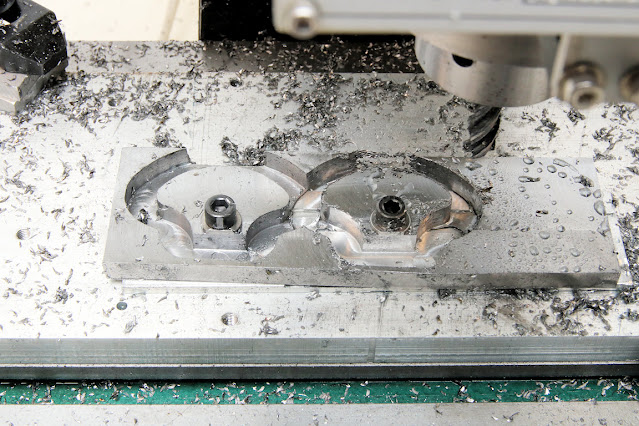 Look between the two of them where the piece of stock that hasn't been cut away has a point that's pointing out of the screen.  See the ledge between the left and right pieces?  It's an arc from that point to the right side of the left counterweight.  What you're seeing is the left one isn't cut to full depth while the right one cut through the steel into my scrap aluminum backing piece in places.  The backing piece is visible on the front left.

I ran into a couple of oddities with the one on the left. The first was that my CAM file thought it was done after cutting down .300 and not full thickness (.312).  I would have sworn that went to the full depth.  It was easy to extract one of the paths around the outline and run that as a separate file, just cutting a little lower by .005 then .010.  Then I rechecked my Z axis and found it was way off - like around .025".  I re-zeroed Z, and added the final trip around the part to the CAM toolpath file to get it to cut the full 0.312 depth.  Then I moved it 2" over to the right to cut the second one

All that irregular depth of cut meant was that when I took them off that fixture they're on, I had to do some file work to make the problem child match the other one.

Now we get to the real meat of this task.  How do I hold those rounded parts so that I can cut out the rectangular relief that goes under the mounting screw?  The vise, like most machinist's vises, doesn't have a flat bottom; it's more like two rails with a lower area between them.  That means I'd be resting rounded parts on an uneven, sorta-convex bottom.  That ain't gonna work, so I thought how could I cut out a matching radius to put the parts in to hold them?  I thought about using the rest of the steel that I cut them out of, but that's the wrong radius.  That radius is 3/8" more than the part because of the cutter going around them cutting out the parts.

It suddenly occurred to me that I could print one.  Take my solid model of the counterweight, build a rectangular box and use my model to subtract that radius from one side of the box.  Make it wide enough to level on both rails in the vise.  An hour and 30 cents worth of filament later, I had a fixture.  The two parts squeezed together are .620 thick, and I made the plastic thinner - like about .575 - so that the jaws wouldn't just squeeze the plastic but would lock the parts in place. 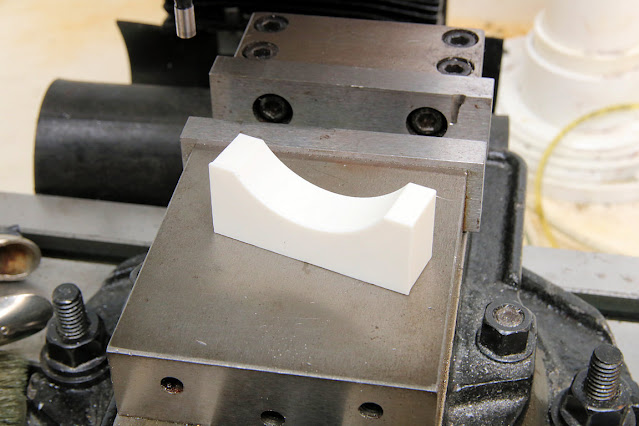 That left two tasks: make sure they're not tilted, and then get an accurate zero in X.  I have an angle gauge that reads to .05 degree, so I set the angle that way. 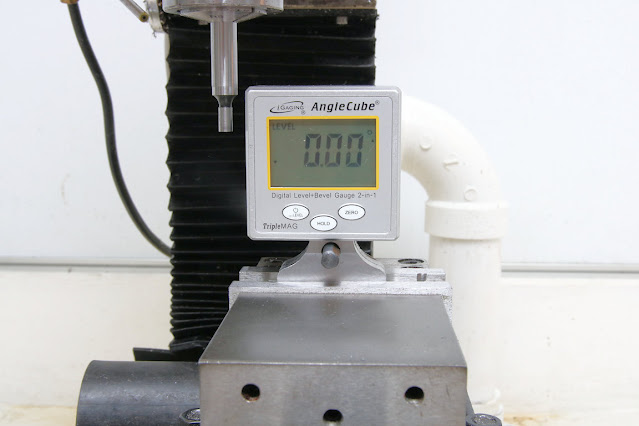 Solving problems like this is one of the main triggers that got me to buy the printer.  Fixturing and work holding are just about the most important aspects of milling and good fixtures can save tons of effort.

Once I cut the rectangular cutout, the printed fixture was a perfect way to hold the two parts to drill the through hole in the parts.  Being backed by plastic and not my vise made it risk free to the vise so a no-brainer to do.  They're not technically done in this picture, there was one more step, but they're pretty close to being done. 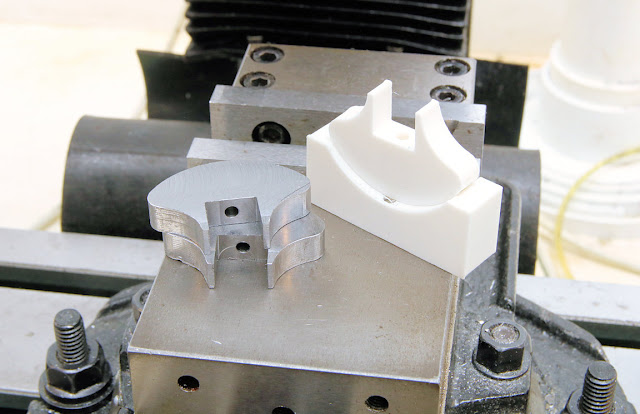 This is after the second setup of the three needed, with the two counterweights alongside the fixture and the 3D printed test counterweight I did to make sure the dimensions were right after I translated from .pdf files to a CAD drawing.

Those through holes in the counterweights are from a 0.136" drill bit, so they seem to be sized to pass a #6 screw (I dropped a #6 Socket Head Cap Screw into one and it fit just fine).  Where the end of the through hole meets the top of the rounded top edge, the hole gets counterbored with a 1/4" end mill 0.444" deep.  Those holes are finished but don't show up well in a photo.

I'm not sure what the next part is.  I've never made a crankshaft like this one, and it's going to be quite a learning experience.  It's supposed to be cut from 0.50 x 1.00" inch blank, but nobody sells those.  Instead I got a 1-1/4" round bar that will have to be made into the rectangular block.  That could be it.