Mass Production of Rocket Engines is No Longer An Oxymoron

SpaceX is planning to break ground soon on a new manufacturing facility for their Raptor engines in McGregor, Texas.  The plan is to produce 800 to 1000 Raptor engines in a year.  From that link to Elon Musk's Twitter account:

We are breaking ground soon on a second Raptor factory at SpaceX Texas test site. This will focus on volume production of Raptor 2, while California factory will make Raptor Vacuum & new, experimental designs.

Musk also referred to the coming factory as the “most advanced rocket engine factory in the world” and while it may sound like hyperbole, I find that very believable simply based on quantities.  Until now, rocket engines have been more like hand-crafted boutique items than something mass produced using the most advanced technologies.  I wouldn't be surprised if in their first year or two they produce more engines in the thrust class of the Raptor than have been produced in all of history.

A fully equipped and fully modern factory is what you need if you intend to build and outfit a vast interplanetary fleet of Starships and the earthbound Super Heavy boosters that will send them on their way to Earth orbit, the Moon, Mars, and beyond.  It makes the Raptor family picture posted here on the 12th look like "an OK start."

While the picture seems to show nine sea-level Raptors along with one vacuum version (lying on its side behind the front row), around the time Musk revealed the plans to build the new factory he Tweeted:

Final decision made earlier this week on booster engine count. Will be 33 at ~230 (half million lbs) sea-level thrust. All engines on booster are same, apart from deleting gimbal & thrust vector actuators for outer 20.

That means every Starship and Superheavy combination will require 42 raptor engines: 33 in the Superheavy booster, plus three regular and three Vacuum Raptors in the Starship upper stage.

While Raptor’s current design isn’t quite there, Musk says that SpaceX will debut an upgraded “Raptor 2” engine in the not too distant future, raising maximum thrust to 230 tons (~510,000 lbf). Aside from the removal of a few structural components required for engine gimballing on 20 booster Raptors, every engine on Starship – save for 3-6 vacuum variants – will thus be identical.

That's right; the 33 engines in Superheavy booster will produce 16.83 million pounds of thrust; over twice the thrust of the Saturn V that put Americans on the moon 50 years ago. 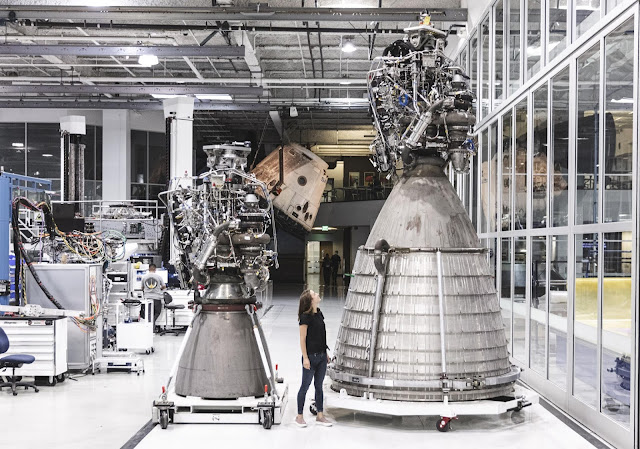 SpaceX photo of a sea-level Raptor (SN4) on the left and the Raptor Vacuum version in their Hawthorne, California facility.

According to Musk, Raptor Vacuum production will remain in Hawthorne alongside work on “new, experimental designs.”