As SpaceX Prepares Superheavy to Fly

Over at SpaceX Boca Chica, Texas, the Orbital Launch Integration Tower had its final section put into place yesterday (July 28) extending it to its full height of ~440 feet.  That was originally supposed to have been done the day before, but some issue kept them from proceeding.  Elon Musk says that what they do now is essentially convert the OLIT to Mechazilla, the robotic version of Godzilla.  Or something like that.

While none of us know exactly what this is going to eventually look like, it's clear that pipes to get liquid methane and oxygen (LOX) to the Superheavy booster and Starship upper stage need to be added to the OLIT, along with provisions for every monitoring cable that will attach to both.  There will be elevators to get to various levels and a large crane to lift the Starship upper stages onto the boosters (the motor for something like those has been installed).  I'm sure there's lots more that I'm not thinking of, but as of now, it looks fairly empty.  That's the OLIT on the left here, with the ground support tanks in the middle foreground. 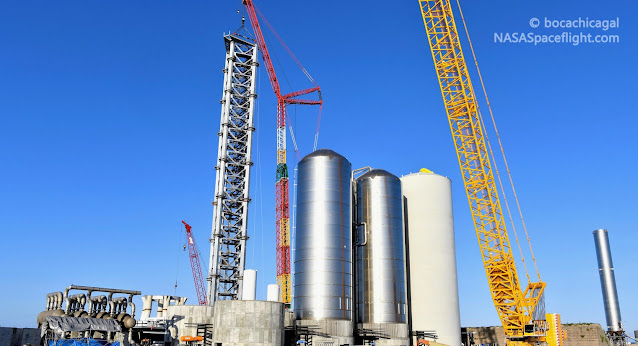 Photo by bocachicagal, Mary, for NASASpaceflight.com.

While the work continues of completing the OLIT, the first Orbital Launch Pad, which we've known was coming for almost a year, has also become the target of some work.  The table to be installed on the launch pad also moved to a position next to the pad this week.  It's easy to underestimate how big a task SpaceX has created for itself here.  A vehicle the size and liftoff thrust of a Starship/Superheavy combination has never existed anywhere.  NASA took a couple of years to build the Vehicle Assembly Building and the launch pads for the Saturn V, and that's a smaller task than this.  When you add in the capability of catching the returning boosters and turning them around for reuse, nobody in history has done this. 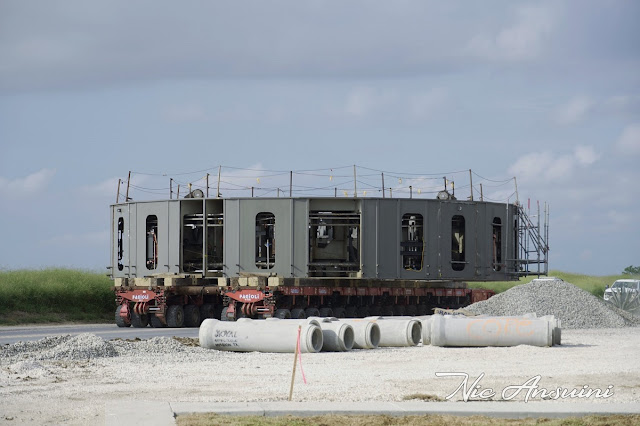 
The booster currently on the test stand (visible far lower right corner above), B3, is not intended to fly and never intended to carry a full complement of Raptor engines.  Elon Musk revealed a view of the piping inside the Superheavy booster, most likely a photograph of the inside of Booster 4, currently being assembled at the shipyard.

For the most part, Super Heavy is just a colossal duo of steel propellant tanks that is – to an extent – even simpler than its smaller Starship upper stage, which needs two types of Raptor engines, flaps, a bevy of maneuvering thrusters, and more. However, at the booster’s base, SpaceX must design, fabricate, and assemble a nightmarishly crowded and complex mechanical structure capable of mounting, fueling, and powering anywhere from 29 to 33 Raptor engines.

Simultaneously, that structure and all associated plumbing must withstand the force and pressure of more than 2000 metric tons of cryogenic liquid oxygen and the 7500 tons (16.5 million lbf) of thrust those Raptors can generate. That’s just the bare minimum, though. 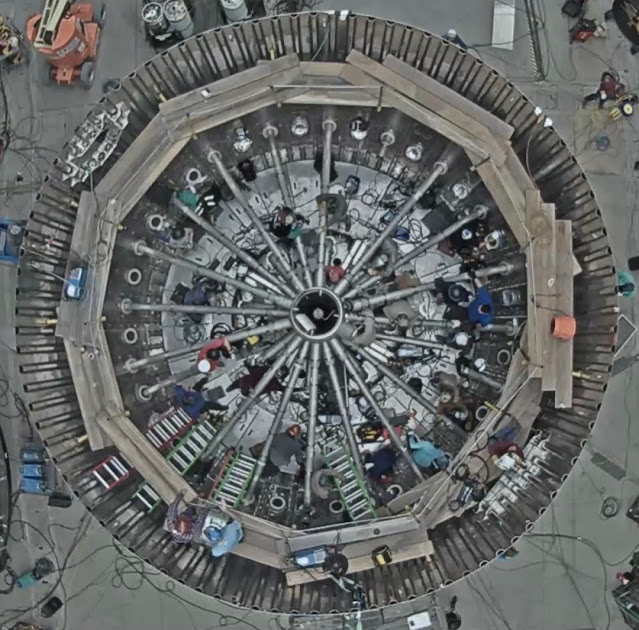 Nightmarishly crowded and complex is an apt description.  I have trouble simply counting the number of workers in there trying to bring B4 to life.  Now consider the environment that will experience.  On the far side of that spaghetti-maze of pipes, will be nearly three dozen rocket engines burning fuel at a couple of thousand degrees.  On this side, the temperatures will be cryogenic with liquid oxygen in the vicinity of -300 F and liquid methane about 40 degrees warmer.

SpaceX is being uniquely open about what they're doing, in showing pictures like this and hosting the various cameras that watch everything 24/7.  This is probably doing more to encourage STEM education, or more education and training than just about any of the regular programs out there.