Is It Too Late for Jeff Bezos to Save Blue Origin? 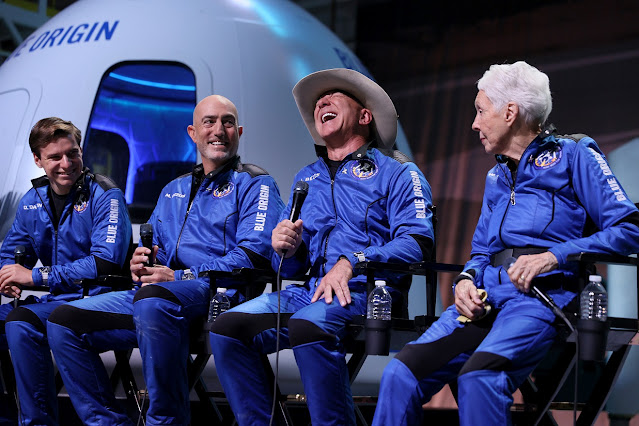 I think everyone should Read The Whole Thing, and as I usually do, I'll excerpt some pieces to whet your interest.

So after he returned from his spaceflight on Tuesday, what I most wanted to know is whether Jeff Bezos is all-in on space. He has the vision. He has the money. But at the age of 57, does he have enough years or willingness to ensure Blue Origin’s success? Or will he leave Blue Origin to flounder and instead mostly retire to his half-billion-dollar yacht after a suborbital joyride?

The jury is very much out.

Back in May of '19, I did a story on Jeff Bezos vision for Blue Origin's role in space.  Instead of settling on and colonizing Mars like Musk advocates, Bezos is an advocate of colonies in space.  Not International Space Station style; not even rotating wheel-in-space from the movie 2001-style.  Those are thousands of times too small.  Instead, he envisions "O'Neill Cylinders;" colonies of millions of people living in permanent colonies in space.  About a million people per colony.  This is as much a multi-generational commitment as colonizing Mars.

He envisions not lifting metals from Earth to build them, but mining asteroids and refining the metals there in space.  It means mining water, perhaps from comets, perhaps ice from the rings of Saturn.  All this depends on cheap access to space, which to his credit, Bezos has talked up with the New Glenn and other heavy lift vehicles.  He just hasn't done as much as Elon Musk has to get there.

The company has a plan. It started small with the New Shepard system and learned how to reuse rockets. It is currently developing the much larger New Glenn rocket, which will essentially use the New Shepard design as its second stage. There are plans for even bigger rockets down the line, all with the goal of moving more mass to and from planet Earth much more cheaply.

Yet this plan has unfolded very slowly, and Bezos has not pushed forward with the same determination displayed by his leadership of Amazon. Blue Origin remains very far from self-sufficiency. Bezos still must pump more than $1 billion into Blue Origin annually to keep the lights on. Even for the world’s richest person, this kind of financial backing does not seem sustainable.

Both Blue Origin and SpaceX are about the same age - 20 years old. Since the end of 2015, Blue Origin has launched its suborbital New Shepard system just 15 more times, an average of fewer than three missions a year. In 2015, SpaceX landed the first Falcon 9 successfully on land.

Since December 2015, the company has successfully flown more than 100 orbital missions. It has developed and flown the world’s most powerful rocket, the Falcon Heavy, and may soon debut its still more titanic Starship launch system. With the Starlink internet constellation, SpaceX now operates more satellites than any nation or company in the world. And in 2020, thanks to SpaceX, NASA broke its dependency on Russia for human spaceflight. NASA astronauts now ride to space in style, inside the sleek Crew Dragon spacecraft.

All told, Blue Origin now has millions of square feet of facilities. Currently, it just has precious little rocket hardware. For all of its construction efforts, Blue Origin has yet to deliver a BE-4 engine to United Launch Alliance. And the massive New Glenn rocket, about which Bezos has been talking about for a decade, remains at least a couple of years away from its first flight.

The thing to remember about yesterday's flight of the New Shepard is that it could have flown as early as 2019 - no new technology was added to what they were flying then.  Instead the launch was two years later.  Think of that when people criticize Branson and Virgin Galactic for doing a stunt to get to space before Bezos.  If Blue Origin even remotely had their act together they could have beaten Virgin Galactic by one year, if not two.

As I said, it's an interesting article, written by a guy who has spent time interviewing Musk for a book on SpaceX and has also spent time with Jeff Bezos.  There's plenty of content left there for you to learn from.