What if Democrats Understood Economics?

The last few days have been full or statements of idiocy from the 623 announced Democratic presidential candidates, and made me think of how even an undergrad econ student should understand where they're wrong.

Since I only have time to focus on one, Elizabeth Warren, Fauxcahontas, proposed to pay off $1.25 trillion in total student debt over ten years, and also called for a $100 billion increase in federal student aid that does not have to be paid back.  She also proposed that public two and four-year universities be completely tuition-free by way of a "state/Federal partnership".  And a new, super duper, ultra tax for billionaires that I need better numbers on to see if that's remotely realistic.

This article will emphasize the free college.  I feel bad about writing about stuff that's so blatantly obvious - you, dear Reader, are far too smart to believe Democratic primary promises - but I hope I can add a piece of information or two that might be helpful for you.

First off what's wrong with higher education in one word?  Government.  Too short?  How about this?
Everything wrong with education comes from government screwing it up by supplying lots of money.  Warren's answer?  "Let's do it again, only harder!!"

Let's be honest here.  There's more evidence of simply stunning economic idiocy.  A college degree is valuable - to the extent that it still is valuable - because not everyone has one.  Not everyone can master the work.  If everyone has an Associates or Bachelor's degree (depending on which candidate is promising), it will become equivalent to today's High School diploma.  You can actually see this already happening in that the only degrees that help graduates to get hired are the ones with strong skills imparted.  There simply aren't many jobs for holders of degrees in Philosophy, Literature, or Offended Minority Studies.  Any 12th grader wanting to major in those things needs to know they're going to go deeply in debt and have a meager life when they graduate.

If college becomes "14th grade", the perks and higher pay will go to the Master's Degree holders, the Ph.D.s or some degree that doesn't exist yet.

But you don't have to take my word for it.  What we predict with simple application of econ 101, "Supply and Demand" is already true in South Korea where college attendance is almost 100%.


Seongho Lee, a professor of education at Chung-Ang University, criticizes what he calls "college education inflation." Not all students are suited for college, he says, and across institutions, their experience can be inconsistent. "It’s not higher education anymore," he says. "It’s just an extension of high school." And subpar institutions leave graduates ill prepared for the job market.

A 2013 McKinsey study found that lifetime earnings for graduates of Korean private colleges were less than for workers with just a high-school diploma. The unemployment rate for new graduates has topped 30 percent.

I've used the following graph several times.  As I said the last time, it's kind of old but searching for updates wasn't fruitful.  It shows the inflation of college tuition (top) vs. medical care (mid) and the official cost of living (bottom).  This is the effect of the unlimited loans and other free money. 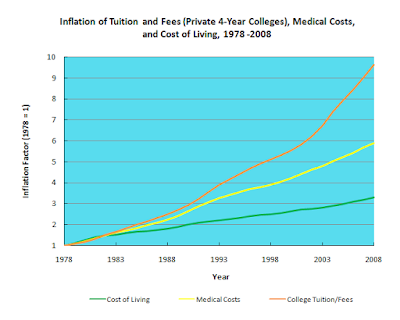 Here's the hard question.  Does Warren actually know this?  Does she actually know her ideas can't work and will just destroy colleges and force more people into the pursuit of higher degrees?  Back during the Obamanation, Bamster did an end run around the law and appointed her to "staff up" the just-created Consumer Financial Protection Bureau, which she did and that apparently involved economics.  But I also found some criticism of her work by one of her professors back at Rutgers, before she did the affirmative action gig at Harvard.  He didn't think too much of her intellectual prowess.

It could be that she just thinks Democrat primary voters are complete idiots and will vote for her because of this idea. Or it could be she's a big enough idiot to believe it herself.