It's time for our annual bacchanalia of the made-up holiday they call Earth Day.

Earth Day, as most of you know, was made up in the late 1960s at the start of the national environmental movement.  Ira Einhorn is one of the main founders of Earth Day, if not the guy who started it.  Ira practiced what he preached: he murdered his girlfriend (less stress on the planet, ya know) and composted her body in his closet.  (Hey - reduce, re-use, recycle!)  And that was before people started worrying about their carbon footprints.  What a leader!

Over the years, I've wasted far too many minutes writing about Earth Day.  It's too long to sort through and pretty much all curmudgeonly, so I'll just say I hope you had a nice day.  Still, there are a a couple of good things to remember about the modern environmental movement.  If you'll just remember that nature wants you dead and most environmentalists prefer the wild animals over you (look at how they respond to wolf attacks on cattle or people), you'll have a pretty good start.  In fact, it's probably easier just to say that mainstream environmentalists want you dead.
Gee, the moderate guy only wants to kill off more than 95% of the human race.  See the current world population is around 7 .7 billion people.  For Dave Foreman, 100 million out of 7 billion is 100 out of 7700 or 1.3 %.  At 300 million, Ted Turner would generously let 3.9 % live.

Unfortunately, between Erf Day and Easter falling so closely together this year, plus spending lots of time helping the still-on-a-cane Mrs. Graybeard, I forgot to get the tires for my celebratory tire fire.  I'll have to turn on all the lights in the house and both air conditioners to make up for it.  If you have your tires, just remember your tire fire should be visible from Proxima Centauri; and if you don't have tires to burn, your house should be visible from that star system. 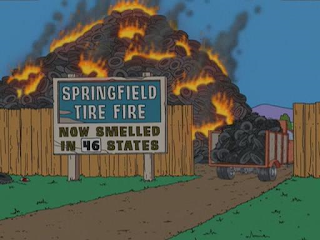 More seriously, the environmentalist predictions have been so consistently wrong, Borepatch has a few (and only a few), if you could find a place that takes bets, bet against the greens every time.  If they think I shouldn't be having a tire fire, it's a safe bet I should.