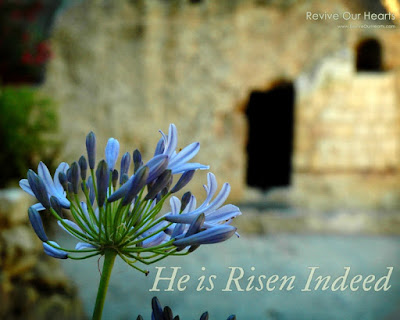 I thought it was time to re-dress my annual Easter post and drop some of the links that are over five years old.  Part of my usual posting is hard to drop, because it's part of my personal conversion story, so parts of that will still be here.

Coming from my background, it was a large change.  I had studied biochemistry and microbiology in college through my third year before life imposed some detours, eventually getting my degree and starting to ply my trade as an engineer.  I had been an amateur astronomer, so between them I was deeply marinated in the standard model of Cosmology as well as conventional biological evolutionary theory.  Frankly, I wasn't giving it much thought any longer, but my wife had re-affirmed her faith (she had first accepted Christ as child) and I was having all of my mental models disrupted.  She had started a subscription to Bibical Archaeology Review and the constant refrain from archaeologists, not religiously motivated, along the lines of "we thought this was old Jewish folklore, but here it is" got me thinking "if that's true, maybe there's more that's true."  Strobel's The Case for Christ, played a role in filling in the gaps in my historical knowledge.

For a great examination of this, see the 2016 post "Five Confounding Facts About Jesus' Resurrection" at Sense of Events. Donald Sensing put together an excellent piece; simply put, it's preposterous to reconcile the events of that time without saying Jesus rose from the dead that Sunday.  This year, Sensing has outdone himself with several days worth of posts on the historical Jesus, including a rather long piece on exactly why Pontius Pilate executed Jesus.  This is followed by articles put together by working scientists, "Can A Scientist Believe in the Resurrection?" and "Is Belief in the Resurrection Unscientific?"

Evolution vs. creation? I believe people pay way too much attention to this.  There's no mention of evolution in the bible, but there's no mention of the laws of thermodynamics, Avogadro's number,  relativity or thousands of other such things.  The bible isn't a science book.  Look at it this way: the creation story, how we got here, takes up a page.  The next thousand pages (or more, depending on font size, paper size, and so on) are concerned with how we treat each other while we're here; how we create and maintain a civil society.  Creation is clearly not the emphasis of the book, the other 99.999% is.

Enjoy your day.  Enjoy your families. As usual there's a pork butt in the smoker but with the added experiment of seeing how doing most of it in the ultra-controlled sous vide cooker does.  Pulled pork tonight.