Receivers and Other Radios - Part 3

This is offered as part 3 of my (long dormant) The Least You Should Know series.

This is going to deal with things that are helpful to understand when comparing different radios because the things I'm going to talk about are both descriptive and quantitative.  I'm going to start with the quantitative.  I know this is going to turn off a lot of people because they stopped thinking about math long ago.  What I'm talking about, though, is all knowing the buttons to push on your calculator, not solving nasty problems.

For example, let me start with the most useful thing.  Radio signals cover a tremendously large range of voltages.  Your $25 Chinesium handie talkie might give you audio you can understand on 2 meter FM with the antenna providing 0.25 microvolt - 1/4 of 1 millionth of a volt.  On the other hand, if someone is standing next to you, they could put a couple of hundred millivolts into the radio, nearly a million times more voltage.  To handle those numbers conveniently, we take ratios of the powers and call them decibels.

There's a gotcha hiding here: if the resistor values aren't the same, you can't calculate the dB difference by 20*log(V2/V1), you have to calculate both powers and go back to the 10*log(P2/P1).

The different disciplines in electrical engineering often have their own favorite units.  Radio designers have long taken the special case where the reference is 1 milliwatt (mW) or .001 Watt, and the unit is called a dBm, "dee bee em".

To a receiver, 0 dBm is BIG signal, yet if you're tuning around the shortwave bands, I've seen signals that big in the Shortwave Broadcast band around 5 MHz.

What about turning a voltage like that 1/4 microvolt (often crudely written uV) into dBm?  It's a couple of step process.  Here, I'm going to use "calculator talk", which is to use the EE key (Enter Exponent) that a lot of calculators have.  First we turn that voltage into power by V2/R, then turn that power into dBm.  The input of many modern receivers, especially broadband receivers, is 50 ohms and as close to a pure resistor as they can manage.

A shortwave receiver might have to handle a range of signals from those that are down in the range of a few microvolts, 5uV is -93 dBm, up as much as 10 milliwatts, +10 dBm.  Commercial receivers will give a good usable audio out at -110 dBm, making their operating range 120 dB wide.  That's a ratio of 1012 or 1 Trillion.

Going back and forth between volts (micro-, milli- and so on) to dBm is tiring and tedious.   That's why radio engineers tend to stay in dBm; or at least stay in either power units or voltage units.  You either get a little piece of software for your calculator or other thinking device, or get a table (pdf) like this. 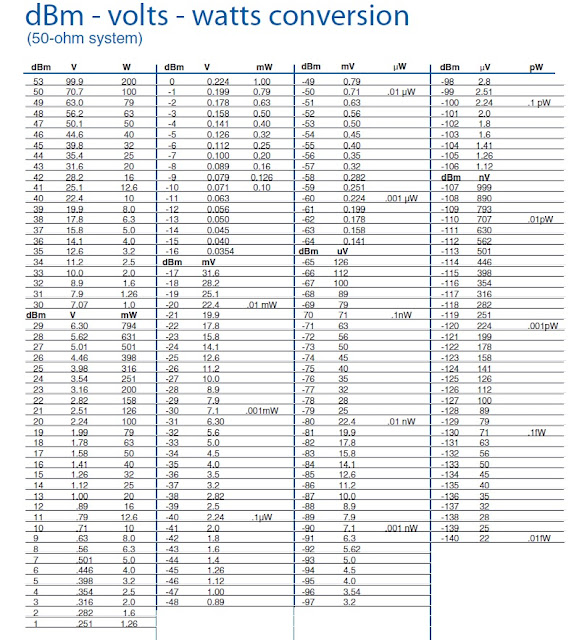 Another useful thing to know about dB relationships is how they correspond to linear ratios:

For power ratios, every 3 dB doubles the power, so adding 3dB to 3dB doubles 2x to 4x the power.  Adding 3dB to the 6 doubles it again from 4x to 8x the original power.  For negative ratios, it's 1/whatever the chart says, so -3 dB is 1/2 the power, -6 dB is 1/4 and so on.  Remember our 20* log definition?  The ratios in that little chart are for power, which means that a 3 dB ratio looks like 2 x power, or 1.41 x voltage.  You can see these things in the chart. The important part is that there's no such thing as a voltage dB and a power dB.  A dB is a dB, the difference in voltage just looks different than the difference in power.

When we talk about sensitivity and selectivity, these are usually expressed with dB ratios.  The sensitivity might be expressed as dB of signal to noise ratio (SNR) or the slightly more difficult signal to noise and distortion (SINAD).  If one radio claims a 10 dB SNR at -107 dBm and another claims it at -110, that second one is 3 dB better, which is twice as sensitive.  Which may or may not be meaningful for your use.  Selectivity might specified that at some frequency offset from where you're tuned, and interfering signal is attenuated (made weaker) by 40 or 60 dB.