Two stories that are short and don't belong together.

You're probably thinking of more Florida man/woman stories.  This time it's a Florida Reptile.

You may know we have a problem with Burmese Pythons taking over the ecosystem in the Florida Everglades.  I know I've done a few stories on these (cool photo or useful map of python range).  Our local paper carried a story that shows even a bad python may have a silver lining (?)  It seems the pythons are killing off rattlesnakes by carrying a parasite that is decimating the pygmy rattlesnake population.


Now, Burmese pythons are killing — although indirectly — one of their own ilk, the pygmy rattler.

The researchers found the invasive worms in Central Florida, more than 100 miles away from where the Burmese pythons reside in the southern portion of the state. But that doesn't mean the pythons are there. The parasite is getting that far north by other means, hitching rides in reptiles and other host critters that Florida snakes eat, with risk of spreading far beyond the Sunshine State.

Yes, I know that rattlesnakes can be important predators in the ecosystem, but I don't mind a few less pygmy rattlers.  While I know people who have encountered very large eastern diamondback rattlers, pygmy rattlers are more likely to brush up against the people in suburbs and more rural areas.

OTOH, this being Florida, Australia of the northern hemisphere, the pygmy rattlesnakes are probably keeping something even worse under control.


Back on the first Sunday of March, I posted about Mrs. Graybeard's painful trip over the hose while setting up to wash the cars.  For the rest of March and into last week, she was confined to a walker with instructions to not put any weight on that foot, along with lots of other restrictions.  We did x-rays every week to ensure the part of her thigh bone that broke off didn't displace but started to attach to the rest of her femur.

Last Monday, week 5, the doctor cleared her to start putting more weight on that, and to get around on a cane instead of the walker.  We have both the cane and the walker from earlier "adventures" so it was easy to transition. She pretty much re-achieves some extra motion and extra ability daily, getting a bit more back to normal a little at a time.

Today we did what we probably would have done a month ago, and went to our local multi theater to catch Captain Marvel.  Unless you pay no attention to the Marvel Cinematic Universe (MCU) you'll know that calling for Captain Marvel was Nicky Fury's last act at the end of Avengers Infinity War and there are scenes in the trailers showing her working with the remaining Avengers for Endgame.  It was originally rumored she was the only Avenger strong enough to take on Thanos.

Let me start out by saying this is a good movie that belongs in the MCU; it's not stuck on like they didn't know where else to put the character.  Both Mrs. Graybeard and I were dreading that it was going to be too full of "Grrrl Powerrr" stuff and it wasn't.  Captain Marvel is played by Brie Larsen, and back in 2017, when I wrote about Kong: Skull Island, I referred to her as "the designated pretty girl" part.  I didn't think much of her because she was really a background character playing a stereotype role in a comic book movie.  In this movie, she shows quite a bit more acting range and is actually quite good.

The movie is Captain Marvel's backstory to help setup Avengers Endgame.  I don't really want to do paragraphs explaining the plot - go see it.  In using this movie to do Captain Marvel's story, they devote the full two hours to her story which makes much more sense than a half hour tacked onto Avengers Endgame.  This way, I'll bet Marvel makes both movies more watchable and gives a more complete storytelling than, say, the first half of Wonder Woman doing her backstory.

If Thor Ragnarok is my favorite of the MCU movies, I can't rate this one higher than that, but this was a good, fun movie.  Better than Black Panther, not as funny as Ant Man or Ragnarok, and better than I expected.  Good solid 4 and some change out of 5.  The movie starts with a modified opening that replaces the familiar flipping comic book pages with a tribute to Stan Lee.  Stan appears in this one in a cameo, and I understand he appears in Endgame, too.  The usual Marvel previews during and after the credits are worth waiting for.

Oh, and watch for the cat, Goose. 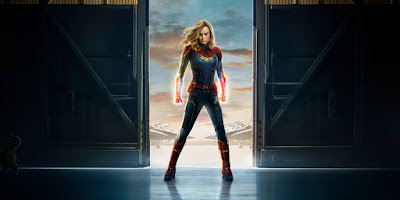