Jason Leon, a south Florida resident, was driving an ATV around the Florida City area with some friends when he noticed a snake's head sticking out of the brush.  He got off the bike, grabbed the snake behind its head and started pulling it out.  And pulling... and pulling.


“I’m actually really mad I had to kill it,” Leon, 23, said Monday. “But at one point it coiled around both of my legs and my waist, and I wasn’t going to take a chance on letting that thing get to my neck.”

So he killed with a knife.  The snake measured 18 feet 8 inches long and weighed 128 pounds, a new state record.  Here, three people at the University of Florida lab in South Florida pose with the snake to put that size into perspective: 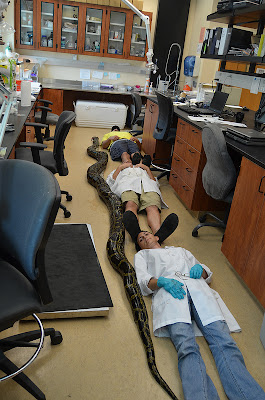 The Burmese python is an invasive species here in Florida, especially the Everglades.  There have been statewide hunts for them, organized hunts, and challenges to chefs to develop recipes for pythons and the other invasive species we have problems with.  The python permit is a year long permit that allows you take several different species of reptiles.

Waiting for the inevitable "tastes like chicken" or "18 foot long hot dog" jokes to start...