Every pilot knows that there are times in the flight when control of the airplane does not reside solely in the cockpit.  Most will admit that a big thunderstorm is not something to fly through.  Thunderstorms can have terrible downdrafts, wind shear, turbulence and hail.  It doesn't matter if you're flying a small home built or a commercial jet liner; if you don't have your wits about you, and a bit of luck, you could have far more excitement than you'd like.

This is an Airbus (mumble mumble) after going through a bit of a hail storm en route to (mumble mumble).  I'm told by my source that this was in early 2012. 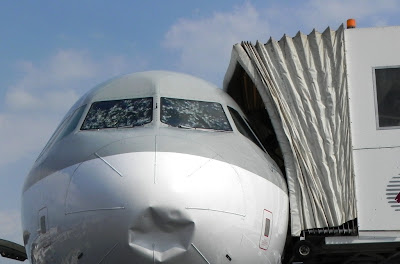 In addition to the obvious windshield damage, note the nose over the weather radar is crushed in.  I don't know if the radar continued to work.  The windshield doesn't look very good from the inside, either, but these pilots are all instrument-rated and the planes have every system there is; they don't really need to see the runway.

“There is no reason to fly through a thunderstorm in peacetime.”  – Sign over Squadron Ops desk at Davis-Monthan AFB, AZ, 1970.