On this memorial day, I've seen a familiar haunting image from 2005.  Donald Sensing links to it as, "a single image continues to haunt".  And it does.  But this one still haunts me in deep ways. 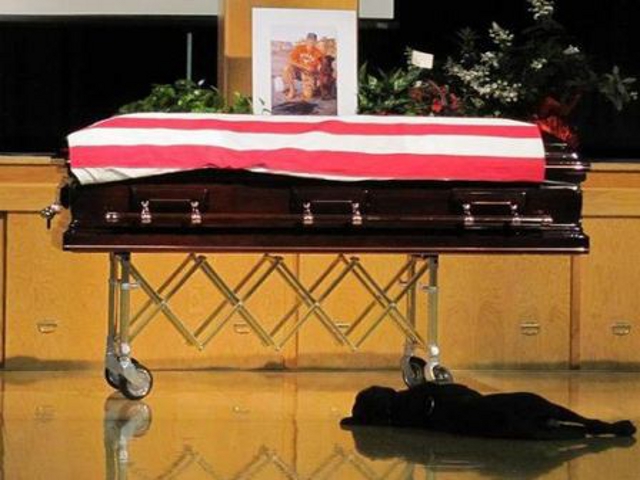 
In a final act of loyalty, Hawkeye, the dog of slain Navy SEAL U.S. Navy Petty Officer 1st Class Jon T. Tumilson walked up to his fallen master’s casket during the funeral in Rockford, Iowa, and then laid mournfully down beside the body for the rest of the proceedings

Hawkeye refused to abandon his "master".   Petty Officer Tumilson was one of the 30 I wrote about a few weeks ago.  One of the group that members of our administration are being accused of setting up or being complicit in the killings of.

Hawkeye refused to abandon his friend.  Unlike the employees of the state department who abandoned four of their coworkers to die in Benghazi.

If only our administration had the loyalty and pure, raw character of a dog.

To all who served, thank you.  To those who served and didn't come back, words will never suffice.

EDIT 1855EDT: The typo monster stole a word.  I swear, right after I hit "publish" it vanished!

Posted by SiGraybeard at 6:51 PM