Back to work today after a 5 day weekend, and overloaded with some neat techy stuff to let everyone know about.

Back in 2010, I ran a post on a 1W Laser That Sets People on Fire.  It was a very popular post for a long time.  Today, I get news of one with 3 times that amount of power made from the laser diode in a Digital Light Projector (for you true geeks, that's a 5 dB increase).  This is the technology behind DLP movie theaters.
They call it a lightsaber on Gizmodo, but of course it really isn't.  The beam goes on forever like any other light; it doesn't suddenly stop 3' from the emitter, and you can't hit another beam with it to duel in a shower of sparks.  But at 3W, it does cut a lot of stuff open and start a lot of fires.  (and will blind you in an ohnosecond)...

Next, it's virtually a tag line I use that I like to make stuff of all kinds, from electronic projects to woodworking to metalworking and even some software.  There's a relatively new word for people like me: Makers, and a Maker Faire movement around the country.  EDN writes on the Bay Area Maker Faire held last weekend (5/18&19).   If you've never seen pictures from one, get on over there.  Everything from personal drones, to a car covered in plastic lobsters and fish that sing (the Sashimi Tabernacle Choir - I'm not making this up) to robots and this walking pod-thingy which would fit right in at Burning Man (a story in itself). 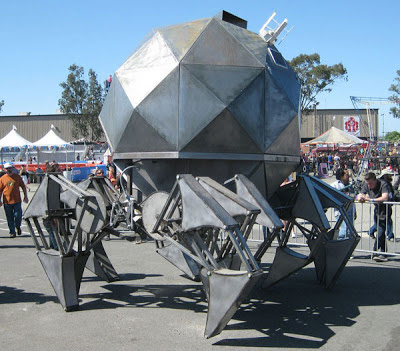 Speaking of making things, if you could use a way to make plastic parts that aren't too big or too critical - we're talking maybe some gears or parts to repair your ice maker, not an AR lower - you might want to look into a 3D printer kit.  This one appears to be decent low end printer with some support, at about $800 (650 Euros).  Other groups make them.  I expect that relatively soon, we'll find that service bureaus will open similar to the paper print shops we have today.  We'll send our files to the shop and pick up the plastic parts later.