Are We In the Age of Robots?

Author Bill Laumeister of Maxim Integrated (Maxim ICs) writes a thought provoking column in Electronic Design online.  He starts with an unusual analogy and goes from there:


Two thousand years ago, Roman citizens would count their slaves to determine how many tasks could be accomplished. Early in the twentieth century, people counted their electric motors to answer the same question. Today we count microprocessors.

He goes on to consider the microprocessor as a robot; “a mechanical or virtual artificial agent.”.  Like most of you, I grew up on Isaac Asimov's robot stories, "I Robot", and more.  I think of robots as having a body that moves around, or, at least a machine with major portions capable of movement.  My CNC mill is more like a robot, my desktop PC less like one, although both contain microprocessors.


Asimov said, “I do not fear computers. I fear the lack of them.”2 We agree. If we removed microprocessors from our homes, our standard of living would plummet.

Absolutely agree with both of them.  Processors are becoming one of the  most common features of our world.  Laumeister writes:

As exceptional as the density increase is, the rest of Moore’s prediction has also come true. The price of microprocessors has declined, so they have proliferated everywhere. You can now buy little processors for less than $1 each. In high volumes, they only cost pennies.

(backgrounder on Moore's law here in pdf.  As an aside, with 2.27 billion transistors in a new processor of which many thousands will be made - and that's this year alone - I believe that mankind has made more transistors than anything else our species has ever made, even screws and nails).

Using the approach in his first paragraph, he goes about counting motors (158), electrically operated machines (87),  and finally microprocessors in his house (278).  I suppose it comes down to your definitions, but his assertion is that programmable processors that do things for us are robots.  He's the first writer I've read to assert this, and it doesn't sit well with me.  A Neato XV vacuum cleaner is a robot.  A processor controlled porch light, while handy, isn't. 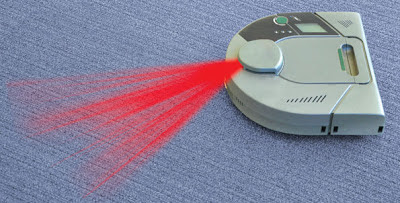 Unlike the Roomba, which takes a random path around the room to vacuum, the Neato maps the room with its little laser sensor, then uses the same sort of overlapping rectangles method that people use.

Everybody seems to agree that robots in my sense will be becoming more of a part of our lives.  Anthropomorphic or humanoid robots are likely to remain an area of research interest because researchers seem convinced it's the Next Big Thing.  Robots that are essentially physically compatible with humans, hands of similar size and geometry, able to fit through the same doors and into the same transports, will fit more easily into our environment.  Getting one to wash the dishes or pick up odds and ends will need less adaptations to work in our environment.  Long time readers might possibly remember my post about humanoid robots two years ago, and the emphasis of researcher Heather Knight to make robots able to live better in human society.   There's a fine line between making robots that move with us, and fit in with us in our homes, but that don't creep us out.  To be honest, some of the robots I see do creep me out a bit.

We have definitely entered the age of robotics, they're just not home robots walking around helping us.  The fastest growing portion of the robot industry is the service robot sector.  I believe robotic "waiters" like these from China will be coming here. 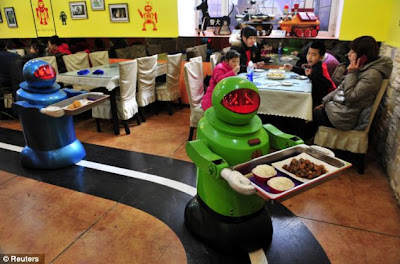 Although maybe they won't look quite as Lego-like.