On the National Day of Prayer

I don't know if it was deliberately planned this way, but the juxtaposition of Victims of Communism Day yesterday with the National Day of Prayer is deeply profound. 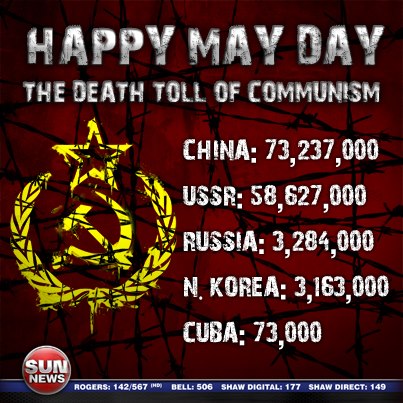 They, are of course, polar opposites of each other.  Communism is Godless - Marx famously said "religion is the opiate of the masses", right?  And the central conflict of our age is emerging as the one between Communism and freedom; the individual's self-determination vs. command/control from authority. The clash between May 1 and May 2 writ large.

Pastor Greg Laurie has the essential observation, writing in the Washington Post:


The heart of the problem is the problem of the heart. ... the fate of the country we love so much hangs in the balance.

We need to fix America's heart; our hearts if we are to fix the country.

I personally don't find much reason by reading scripture to believe that America survives.  I don't know if you've ever been told this, but there is no definite mention of America in Biblical end times writing.  That can mean one of a handful of things and the simplest thing to think is that the end times - let's assume there will be some sort of end times - will occur far in the future.  Add in the well-talked about fact that empires last a few hundred years, and it's not hard to assume we might be gone.  But what if the end times happen soon?  That gets a little scarier.  While I've come across one or two guys who find what they think to be America in end times, most scholars don't.  That means one of two things happens: either the US is gone, collapsed or so busy with some internal problem that the US has no role in the end times.  Despite our economic troubles, we are still a superpower, so something bad has to happen to us.   We would be a very different place for some reason.

Returning to Greg Laurie (and you should RTWT - it's short):


Everywhere we look in America, we see signs of decline. That’s because we have largely forgotten God, but the good news is God has not forgotten us.

In 2 Chronicles 7:14, God says, “If My people who are called by My name will humble themselves, and pray and seek My face, and turn from their wicked ways, then I will hear from heaven, and will forgive their sin and heal their land.”

In other words, America has two options: judgment or revival.

Now, I'll probably surprise you when I say that Marx might have had it right when he called religion the opiate of the masses.  Religion is ritual; pomp and circumstance if you will, not faith.  Personally, I like Ben Franklin's summation of the American Religion:


I believe in one God, the creator of the universe. That he governs by his providence. That he ought to be worshipped. That the most acceptable service we render to him is doing good to his other children. That the soul of man is immortal, and will be treated with justice in another life respecting its conduct in this. These I take to be the fundamental points in all sound religion, and I regard them as you do in whatever sect I meet with them.

Add to that this thought: "you will know them by their fruits" - by the things they produce in their lives.  If they produce murder, death, destruction and chaos, they are not of God.

Donald Sensing over at Sense of Events posts a fantastic, if not rather long (99 minutes) video that's a lecture by Dr. James Tour, one of the top ten most cited chemists alive today, talking about nanoengineering and faith.  He says he has not talked with one of the "world class" (my words) chemists who will say they really understand how macroevolution could have possibly produced the world around us:


I will tell you as a scientist and a synthetic chemist: if anybody should be able to understand evolution, it is me, because I make molecules for a living, and I don’t just buy a kit, and mix this and mix this, and get that. I mean, ab initio, I make molecules. I understand how hard it is to make molecules. I understand that if I take Nature’s tool kit, it could be much easier, because all the tools are already there, and I just mix it in the proportions, and I do it under these conditions, but ab initio is very, very hard.
...
I was once brought in by the Dean of the Department, many years ago, and he was a chemist. He was kind of concerned about some things. I said, “Let me ask you something. You’re a chemist. Do you understand this? How do you get DNA without a cell membrane? And how do you get a cell membrane without a DNA? And how does all this come together from this piece of jelly?” We have no idea, we have no idea. I said, “Isn’t it interesting that you, the Dean of science, and I, the chemistry professor, can talk about this quietly in your office, but we can’t go out there and talk about this?”

In whatever way you practice your day of prayer, pray for the country and your countrymen of good faith.  We are all in for challenging times in the central conflict of our times.  We need to fix America's heart; our hearts if we are to fix the country.

Labels: Me, the big picture