Why The Next 3D Printed Gun Should Be .45ACP

Earlier today, Borepatch linked to a story on Forbes about further experimentation done with a 3d printed gun, plastic barrel and all.


One evening late last week, a Wisconsin engineer who calls himself “Joe” test-fired a new version of that handgun printed on a $1,725 Lulzbot A0-101 consumer-grade 3D printer, far cheaper than the one used by Defense Distributed. Joe, who asked that I not reveal his full name, loaded the weapon with .380 caliber rounds and fired it nine times, using a string to pull its trigger for safety.

When I first heard about the idea of printing a gun, I thought the barrel would be the hard part.  Plastics just wouldn't hold the pressure, or so I thought.  But a few weeks ago, it popped into my head that anyone knows that to make a vessel hold higher pressures, you just increase the wall thickness.  The gun might not end up looking like other guns, but it would indeed be functional.  Here's the barrel they used.  Doesn't look like your typical pistol barrel, but it worked.  This is after 8 shots.  They pulled it after that number, out of caution.  (Forbes) 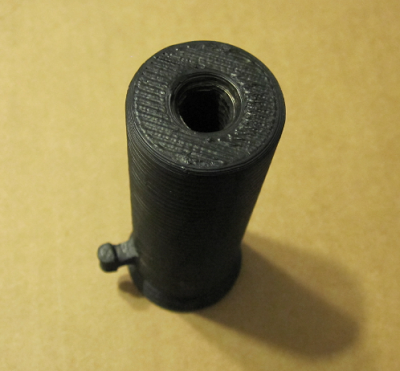 There are limits, of course.  To make a scuba tank that would hold 70 cubic feet of air at 2000 PSI, I don't think you'd want a plastic tank the size of a small room.  Sorry - don't remember how to do the calculations off the top of my head.  (Bad blogger!  Lazy blogger!!  Why, I ought to rub your nose in your Marks Handbook!!). (Whaddaya mean schizo?  Who's schizo?  Us??)  I'm sure a real M.E. would know.

When I saw that Cody Wilson ran his first tests of the Liberator with .380, I was impressed.  I thought for sure he'd run .22LR.  But I never bothered to do what I did I today, look up chamber pressures for various common cartridges. It turns out the SAAMI chamber pressure for .22LR is 24,000 PSI, but .380 is 21,500 PSI. 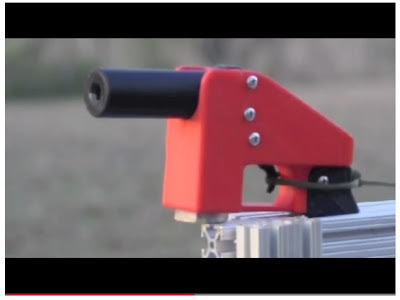 The original FP-45 Liberator of WWII fame was .45 ACP.  Smooth bore, so it was inaccurate.  This one has a rifled barrel (you can print rifling in place!), so it has the potential to be more accurate - though bigger because of being plastic rather than sheet metal.  So what are you guys waiting for?