I'm going to venture into a topic I've never gone into in depth, immigration.  I'm rather sick of being accused of being a hater and racist simply because I oppose open amnesty and open borders, but I really don't care anymore.  I know where my heart and motivations lie.

What got me thinking about this is the ongoing clash of civilizations in Europe.  We see the mass immigration from mostly Muslim countries in Africa, the Mideast and Asia flooding Europe as we see mass migration from Latin America in the US.  Europe is on fire, with the riots and burnings in Sweden going into their sixth day - and when the news reports it's because of "youths", you have to work to determine they're primarily Muslim youth.  The only new aspect of the riots in Sweden is that they're in Sweden - rioting and burning cars is almost an annual summer sport in France.  An increasing number of European nations now have "No Go Zones" where local Muslim populations scare the police out and the governments have given up control by default.  Most European "soft socialist" states have an underbelly of Muslim youths that haven't - and won't - assimilate into their new cultures.  Cap that with incidents like the murder of an off-duty British soldier by Islamic extremists this week and you can see an ascendant Islam taking over the European continent if the Europeans don't wake up in time.

Let me detour to say that if this short overview is offending you because you view Islam as a "Religion of Peace", or you think Islam and Christianity are comparable, or you think I'm racist for saying this, you are simply ignorant.  Don't be upset, ignorance is curable, it's stupidity that's not curable.  Go spend a day or two reading the history at Gates of Vienna.  Read about Geert Wilders and what he's gone through.  Read about the murder of Theo Van Gogh.  I could go on all day.

I believe it was in 2003 - maybe somewhat earlier - that a friend pointed me to Pat Buchanan's book "The Death of the West", and I see it has been revised as of 2010.  It's quite an eye-opening read.  If "Demographics Are Destiny", western civilization is in for a really rough century.  At least since the second World War, the West has been living a pattern of declining birth rates and expanding social structures.  The pattern has been that as child mortality dropped, and birth control became widely adopted, women worked more outside the home, bringing more prosperity, which led to families getting smaller because there wasn't as much need to have large families to ensure some children survived.  It has been said prosperity is the best birth control.  As families got smaller and became more mobile, elderly grandparents were less able to depend on family to help them; that was accompanied by an expanding state social structure.  As Western families get smaller and birth rates drop below replacement rates, tax revenues go down (all other things being equal) making the expanding states impossible to maintain just when they're most needed.  To solve that paradox, Western societies have almost all imported immigrants.  It has not necessarily turned out to be a smart strategy.

I refuse to spend much time on emotional arguments, like how hateful it is to deport children of illegal aliens who were dragged here and grew up in the US.  We're talking a couple of percent (at most!) of the immigrant problems.  I'd gladly say let them all stay if we fix the parts that are downright broken.

We need to close our borders.  Look at a map or a globe: what defines a nation?  It has borders that separate it from other nations, borders that define where different laws and cultures are in place.  Those borders need to be managed and controlled, just like every other nation on the face of the earth manages its borders.  Compare US immigration policy and enforcement to Mexico's or any other place.  We are orders of magnitude more welcoming of immigrants of all types.  And please don't give me this "but we're a nation of immigrants" line.  All nations are nations of immigrants and all have been made up by the movement of peoples between nations.  Who isn't a nation of immigrants?  Myanmar?   And besides; immigrants that came over a hundred years ago - like my grandparents on both sides - are demonstrably different than today's immigrants.  The immigrants from Ellis Island a hundred years ago didn't have a government handout system to fall back on.  They either made it based on their own hard work or they didn't survive here and went home.

We need to know who is coming in and control that.  This all I really want.  We should know if an immigrant really is a farm worker, and not a Hamas operative. 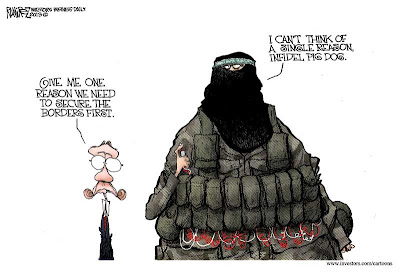 Who says we can't be selective about immigrants we allow into our country?  Why shouldn't we choose immigrants to make our country better?  What moron came up with the idea that we allow everyone in that walks across the border?  Most countries in the world will make sure that at least you're not bringing in communicable diseases, but we apparently don't even do that, and get outbreaks of tuberculosis (and other diseases) in our country.  Sounds like a smart idea to me.  Who's more valuable to our country: a construction worker from Guatemala or a Ph.D. Engineer from Spain?  They're both Hispanic so don't start on that; don't you think the Ph.D. might contribute more to GDP?  A lettuce picker from Tijuana or an M.D. from Germany?  Look, I know we're neighbors with Mexico and Canada, while Europe is much farther away.  Maybe we should have a closer arrangement with them; fine, as long as we know who's coming in.  But the high ratio of Latin American immigrants to Europeans isn't because they're not interested in coming, it's because the 1965 Immigration Law made it harder for Europeans to come here.  I say we should use immigration to make our country a better place - give preference to professionals and high achievers from any place on earth, not to low achievers just because they're our neighbors.  If the intent of allowing the people into our country is to improve the demographics and increasing tax revenues to support the aging population, you want the higher achievers.  If you don't care about improving the country but want a voting demographic that will deplete the country faster, and loyally vote for whomever gives them handouts, you want the low achievers.  I think that shows how the system is running.

But the biggest reason I'm opposed to the status quo is that it's immoral to treat immigrants the way we do.  We make people from Asia or Europe go through years of process and hassle to get here legally, while ignoring the millions who just walk into the States and into virtual slavery.  Illegal immigration is the 21st century version of slavery.  By denying them legal status and legal entry into the country while encouraging them to come with tons of incentives, we're perpetuating a system of abuse of the workers that come here.  Corporations seem to be more than happy to pay them less than legal citizens, and we creating an underclass that can be taken advantage of.  The majority are under-educated compared to Americans, so they have 50% higher rates of poverty.  They represent the vast majority (over 70%) of the increase in the uninsured.  They use welfare programs at almost twice the rate of born citizens (173%).  (Source, Census data excerpted here)  The biggest problem with the immigration system we have now is that it's morally bankrupt and wrong.  We're creating a slave class in the name of keeping our lettuce cheaper.  It's not worth it.