The Structural Problems Taking Down The US

An essay by John Hawkins on Townhall yesterday got me thinking about the structural problems that are combining to take down the US.   Hawkins opens with a quote from Machiavelli that is the root - the thing we need to focus on the most:


“And what physicians say about disease is applicable here: that at the beginning a disease is easy to cure but difficult to diagnose; but as time passes, not having been treated or recognized at the outset, it becomes easy to diagnose but difficult to cure. The same thing occurs in affairs of state; for by recognizing from afar the diseases that are spreading in the state (which is a gift given only to a prudent ruler), they can be cured quickly; but when they are not recognized and are left to grow to the extent that everyone recognizes them, there is no longer any cure.” — Niccolo Machiavelli

Now, Hawkins lists demographics as the biggest problem: in particular, the baby boomers.  He talks about the number of retirees in the next couple of decades: "In 2010, there were 40 million Americans 65 and older. By 2020, that number is projected to be 55 million; by 2030, 72 million.".  That is absolutely a problem, but it's inherently a self-limiting problem.  The problem is that various agencies have promised $124 Trillion in unfunded liabilities and there is simply no way to pay those obligations.  Since things that can't go on won't go on, those promises simply won't be paid.  That wouldn't be so bad if the social structures of a hundred years ago were in place.  Just as I live a few hundred miles from my surviving parent, my kids live over a thousand from me.  A hundred years ago, or 150, families stayed closer together.  Parents worked until they died, yes, but the pace and amount slowed down with age and children helped support their parents.  While the current "twenty-somethings", at least the ones I can see, seem to be tending toward larger families, it's hard to estimate if they can contribute to helping grandparents whom they hardly know to survive.

In my mind, you can't be intellectually honest about the demographic problems without talking about "the A word" - abortion.  A recent study out of New York said an incredible (to me) 41% of all pregnancies in the city are aborted.  It's probably hard to get really accurate numbers, but even Wikipedia reports that since Roe-v-Wade was decided, approximately 50 million abortions have been performed in the US.  50 million more people in the US, and their offspring, would have a large effect on paying for those unfunded liabilities.  And while the majority polled seem to agree that an abortion should be "safe, legal and rare", only a tiny percentage of abortions, 0.5 to 1.0%, are due to the classic, emotionally-charged argument; "you wouldn't want to deny an abortion to a teenaged girl raped by an adult?" which we hear all the time.  The vast majorities cited in the polls summarized on Wikipedia cite reasons more related to inconvenience to the mother.

Still, going back to the opening paragraph, this is an easy problem to recognize.  To use Machiavelli's medical analogy, it's not finding a clump of cells the size of pencil point, it's a tumor the size of a watermelon.  The root cause is political: politicians making promises that they can't possibly deliver on.  Being lawyers, for the most part, they don't understand exponential functions (I'm being charitable here).  Because it's always easier to promise more and let someone else worry about it - "kick the can down the road" - they have an incentive to be irresponsible.  They promise future payments and benefits to keep getting elected, when to keep those payments going requires exponentially increasing numbers of people.  To butcher a quote, "hard work and discipline pay off in the long run, but laziness and spending pay off now".

If you've visited here before, you know I'm a deficit hawk.  I think our debt, today 107.1% of GDP, is a threat to the very existence of our country.  But the deficit is a symptom, not the disease.  The disease is politics and, to be honest, at least partly the result of us - we, the people - being willing to believe the con men.  These promises are too good to be true, and we all know "if it sounds too good to be true, it probably is" (too good to be true).  From the view of the congress critter, he has someone paying him if he adds just a little more spending on one side, and on the other side a small part of the population that wants him to cut spending.  For reasons I'll get to in a few lines, the spending has a very visible good outcome and a not very likely negative outcome.  Of course they'll spend more.

Just as our large debt is a threat to our very survival, our constantly growing government is a threat to our survival.  The number and cost of government regulations is growing every day, the difficulty of starting a business is getting ever harder and our choices about everything from what soda to drink to what light bulb to have in our house are slowly, but surely being taken away from us.  I've often quoted Harvey Silverglate's idea that the average American commits three federal felonies every day.  And it's a central theme to my recurring "Tales From the Over Regulated State".  From their standpoint, it's a feature, not a bug.

The corruption of our political system, with gerrymandering and voter fraud, makes politicians even less concerned about voters.  With reelection rates approaching certainty, unless they're found with "a dead girl or a live boy" (as they used to say) they're in office for life; consequently, it's more frightening for Michael Bloomberg to threaten to find primary opponents for Democrats that won't follow his directives than to face the normal voting process.  Hawkins says,


Nancy Pelosi could NEVER be beaten by a Republican, but if Planned Parenthood or United Auto Workers got angry at her, either could conceivably fund and support another Democrat who could beat her. What all this means in practice is that politicians in both parties are far apart ideologically and have a strong incentive (their job) not to cooperate with each other on anything that may upset a special interest.

While I disagree that politicians in both parties are far apart ideologically - with some exceptions for one or two true conservatives - his point that the system is in the hands of people like Bloomberg and Soros, or special interest groups like the UAW and SEIU, is absolutely right (or the Koch brothers and big oil, or whomever leftists currently think are running everything).

Ever heard of root cause analysis?  It's a structured technique for problem solving, in which a problem is investigated until the most fundamental root cause of the problems is found.  A very common implementation is the "five whys?"; the idea is you keep asking why? to every problem that comes up, and typically hit the root cause in no more than five "why?" answers.  The root cause here is the growth of the federal government and concentration of power in it that results.  When it becomes easier and more profitable for companies or groups like those to lobby the government than to try to win in the market, that's when things go downhill.  This structural problem is what has to be unwound to save the country.  Returning to Machiavelli's observation on problems again:


"...when they are not recognized and are left to grow to the extent that everyone recognizes them, there is no longer any cure."

And that appears to be where we are. 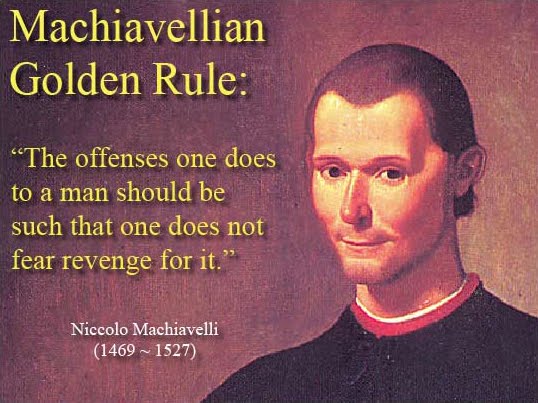 Posted by SiGraybeard at 6:39 PM