Being Proven Right By Unfolding Events

If you're a regular here, you know I take it on the chin when I make a prediction and clearly get it wrong.  I want to take a minute and claim that I think I got one right a while back, and the current IRS scandal is my evidence.

Over on the bottom of the right column, in my list of my most read posts in the history of this blog, I have the story of the raid on the Gibson factory in August of 2011.  The story seemed big because the raid was based on the Lacy Act, a hundred year old act that had recently been given new dentures.  The article opened with this simple question:


"Where were you when owning wood became a felony?"

and centered on the fact that the way the Lacey Act is worded, virtually anything in your possession made out of wood would probably violate the letter of the law.  We're all felons, at the mercy of whatever JBT decides to arrest us.  Here's a snippet, but to get the full feel of it, read the whole thing:


Henceforth, all wood is to be a federally regulated, suspect substance. Either raw wood, lumber, or anything made of wood, from tables and chairs, to flooring, siding, particle board, to handles on knives, baskets, chopsticks, or even toothpicks has to have a label naming the genus and species of the tree that it came from and the country of origin. Incorrect labeling becomes a federal felony, and the law does not just apply to wood newly entering the country, but any wood that is in interstate commerce within the country. Here are some excerpts from a summary:

What made Gibson so bad was that the raid was predicated on the idea that Gibson bought Indian wood that they believe complied with every law on the books, but the Feds raided Gibson based on the Feds' interpretation of Indian law - not even their interpretation of our law.

A couple of days after that posting, August 28, 2011, to be precise, I wrote a piece that pointed out


One of Gibson’s leading competitors is C.F. Martin & Company. The C.E.O., Chris Martin IV, is a long-time Democratic supporter, with $35,400 in contributions to Democratic candidates and the DNC over the past couple of election cycles. According to C.F. Martin’s catalog, several of their guitars contain “East Indian Rosewood.” In case you were wondering, that is the exact same wood in at least ten of Gibson’s guitars.

Gibson's CEO, Henry Juszkiewicz, is a Republican who donated to several Republican candidates and gets raided.  His competitor who contributes to Democrats (and contributes more, by the way) uses the same products and doesn't get raided.  At the time, I pointed out several things that "stink like yesterday's diapers" to use a line from Roger Rabbit.


Gibson is the only guitar company targeted by the Obama DOJ under the Lacey Act -- Tennessee is a right-to-work state.

Fender, Taylor, Rickenbacker, Danelectro, Carvin, MusicMan, and ESP are in California; Spector is in New York; Martin is in Pennsylvania; Guild, Ovation, and Hamer are in Connecticut; Alvarez is in Missouri; B.C. Rich is in Kentucky; Heritage is in Michigan; Washburn is in Illinois. --  All are forced-union states. [emphasis for Martin added]

Does the similarity of Obama's National Labor Relations Board slapping down Boeing for opening a non-union shop in Right-to-Work South Carolina seem like too far to reach for an analogy?


Eric Holder's Department of Justice has proven itself to be a political organization, that is stunningly corrupt, and not only not interested in enforcing laws, but willing to kill anyone anywhere to achieve their political goals (Gunwalker anyone?  Dealing with drug cartels to allow them to move cocaine into the US?).  The entire administration plays politics as bloodsport.  After all, resident Obama told a group of Latino voters, to "punish our enemies", and told followers in '08 "if they bring a knife, we bring a gun".

Does it seem even remotely out of character that they might try to destroy Gibson for being a non-union shop, or for not contributing enough money to democrats?  I don't think so either. 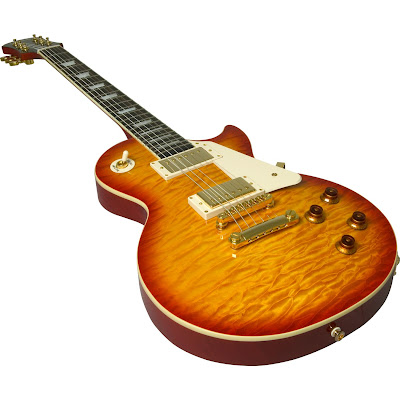 (This is not my Gibson (Epiphone) Les Paul, but a catalog picture that looks strikingly similar to mine.  My contribution to Gibson's defense fund).

I may be reaching, but I think the emerging story of the use of the IRS as a political bludgeon is strong evidence that this whole affair unfolded as I'm describing here.  "Someone" in the administration/DOJ noted that a profitable company wasn't paying enough tribute into their corrupt little empire, or working with enough union goons, and got the raids on Gibson trumped up.  Can I prove that?  No.  I don't know if there are any "real journalists" who will run down a story like this; I don't even know if Gibson thinks it's worth spending money on it.