As is often the case with breaking news events, the story is changing since this original report, but Natural News broke the story into the US that the European Union is currently working on a proposed law that would:


... make it illegal to "grow, reproduce or trade" any vegetable seeds that have not been "tested, approved and accepted" by a new EU bureaucracy named the "EU Plant Variety Agency."

It's called the Plant Reproductive Material Law, and it attempts to put the government in charge of virtually all plants and seeds. Home gardeners who grow their own plants from non-regulated seeds would be considered criminals under this law.

While the law hasn't been passed, and is still in the process of being changed to resolve complaints, it's a thoroughly fascistic piece of legislation.  It's hard to know exactly what problems they think they're addressing, but it probably helps to think you're a factory farmer faced with industrial quantities of sprays and all the other junk they put down.  But never mind that abstract stuff, it's probably just protectionism for the cronies that produce the hybrid seeds.

A seed company from the UK, "The Real Seed Catalogue", has been following things carefully and has a web page dedicated to the new law.  A few extracts that seem important:


The key last minute concessions that were made - and this really was only due to public pressure, because they were not in the draft just 3 days previously - are as follows:
...
We are checking out what the next step is. It appears that next it must go to Parliament for modification or approval, so there is still the chance of changes for better or worse. We must all campaign to make sure only improvements are made!

(Note: isn't nice that the masters have deigned to permit you and I to swap "unapproved" seeds!  And they'll permit us to grow and supply unapproved seeds as long we don't form too big a company.  What a bunch of crap.)

The situation is too fluid to really know what's going on.  If you're in the UK or the EU, and I know I get some visitors from over there, there's a couple of petitions to sign against the proposals and to make better proposals.  The Noah's Ark (Arche Noah) petition and the Seed Sovereignty petition.  (This is the Noah's Ark project that is a monster seed bank under cold storage in Norway, dedicated to preserving true biodiversity through stockpiling heirloom seeds).  And we need to keep an eye on this kind of thing on this side of the pond. 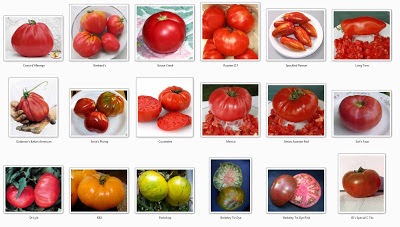 (18 varieties of tomatoes, a gardener's favorite)