On Sunday, YouTube offered me a video by space enthusiast Scott Manley "SpaceX's Crew Dragon Capsule Destroyed In Engine Test".  He used photographs from the local newspaper, Florida Today, showing clouds of orange smoke coming from the test.  The problem is that his video is pretty much Fact Free due to how quickly he put it out; none of the facts he claims are substantiated by SpaceX or backed up by anybody.  Florida Today is still calling it an accident or anomaly with no details on exactly what happened.  Space.com is the same.  In short, nobody is saying exactly what went wrong.  Quite possibly, nobody knows. 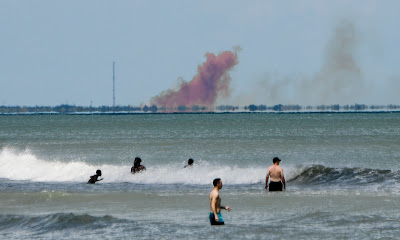 The test was an unmanned test of their Crew Dragon capsule, but nobody will say for certain whether or not it was the same capsule used in their test flight early last month (as is widely reported) or a second crew dragon capsule.  Nobody is saying for certain that the failure involved the capsule's launch abort system, which is based on the hypergolic-fueled SuperDraco engine, but the orange clouds are characteristic of the Nitrogen Tetroxide (NTO) oxidizer the SuperDraco uses (and some nasty shit you don't want to be exposed to!)  That might mean the engine exploded and it might mean something else blew up the NTO tank.

Aside - Hypergolic fuel systems explode on contact, removing the need for ignition systems.  These aren't new, the Titan II ICBM (also used during the Gemini program) used hypergolic propellants.  The idea is almost as old as rocketry.  Likewise the SuperDraco engine isn't new, and has been tested numerous times in the past.

I've been holding off on this story waiting for more details to pass along, but none have been released.  The speculation is that this will push the first SpaceX manned flight into next year and allow Boeing to catch up or pass SpaceX in their competition to be the contractor for manned flights to the Space Station.  It's reasonable to speculate, but without harder facts that strikes me as pointless.  All we have is some generic, vanilla statements.


"Earlier today, SpaceX conducted a series of engine tests on a Crew Dragon test vehicle on our test stand at Landing Zone 1 in Cape Canaveral, Florida," a company spokesperson told Space.com in a statement. "The initial tests completed successfully but the final test resulted in an anomaly on the test stand."
....
"Ensuring that our systems meet rigorous safety standards and detecting anomalies like this prior to flight are the main reasons why we test," SpaceX said in the same statement. "Our teams are investigating and working closely with our NASA partners."
...
"The NASA and SpaceX teams are assessing the anomaly that occurred today during a part of the Dragon Super Draco Static Fire Test at SpaceX Landing Zone 1 in Florida," NASA administrator Jim Bridenstine said via Twitter Saturday night. "This is why we test. We will learn, make the necessary adjustments and safely move forward with our Commercial Crew Program."

Uncharacteristically, Elon Musk has been silent.  He regularly tweets matter-of-factly when they screw up something, like crashing a booster into a recovery drone or dropping one in the ocean.  Maybe he was too busy hyping his self-driving cars.