Late Friday night, two sounding rockets launched from a small spaceport in northern Norway.  The two small rockets soared to an altitude of  200 miles (320 km), and each released a visible gas intended to disperse through and illuminate conditions inside the aurora borealis. Some of the resulting images of the blue gas from the rockets interacting with the green auroras  were stunning.

The two rockets each had four capsules that released the gas in an impressive light show.  At 2226 UTC the first rocket had dropped is blue gas: 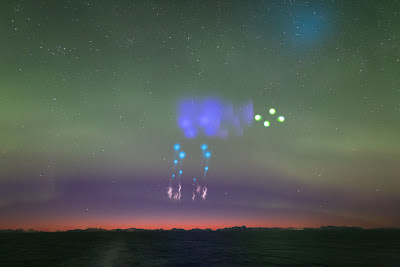 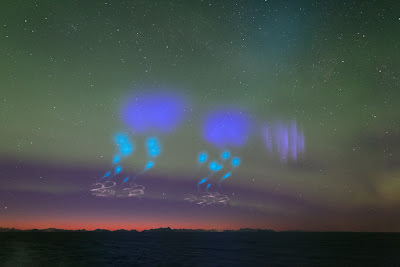 This was the AZURE mission:


This NASA-funded AZURE mission, which stands for Auroral Zone Upwelling Rocket Experiment, is one of a series of sounding rocket missions launching over the next two years as part of an international collaboration known as "The Grand Challenge Initiative – Cusp." The goal of these flights is to study the region where Earth's magnetic field lines bend down into the atmosphere, and particles from space mix with those from the planet.
...
After their launch, the two rockets ascended into space while onboard instrumentation measured the atmospheric density and temperature in order to determine the ideal time to release visible tracers—trimethyl aluminum and a barium/strontium mixture. These gas tracers were released at altitudes varying from 115 to 250km.

ARS Technica included this time lapse video of the experiment made by a guy who just stumbled across the experiment going on.  It's 18 seconds - watch it.  Then I bet you watch it again.

I would have loved to have seen this!  Seeing the auroras has been on my bucket list for as long as I can remember.