I Don't Care Who You Are - That Was Cool!

Mrs. Graybeard and I just enjoyed watching the second launch of a Falcon Heavy (FH) from historic pad 39A on the Kennedy Space Center.  There has been a great deal of buzz about this launch with some local sources saying they expected a couple of hundred thousand visitors to the immediate area around the KSC.

You know, there's only a handful of places on Earth where you can see launches like this, and no other place to see a launch quite like this one.  The FH is the most powerful rocket at liftoff on Earth, but not the most powerful ever, at over 5 million pounds of thrust - the Saturn V that took our crews to the moon had a liftoff thrust of over 7 million pounds.  For every other launch besides a FH, you see a rocket lift off and disappear in the distance.  From a practical standpoint, once it's a minute or two into flight, you don't get a better view of a launch from as close as you can get to the pad as you do from anywhere along the coast.  With the FH, though, you can get this if you get close: 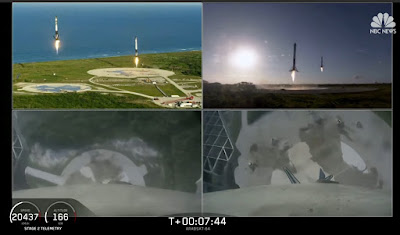 This view of the two side rockets from the Heavy landing is, of course, from the SpaceX video feed, but soon you'll be able to see somebody's home video from nearby.  (I just checked, no videos of tonight's launch yet, just one from a year ago).  The landing site isn't very close to anyplace tourists can get, but is closest (straight line) to Port Canaveral Jetty Park.  I've seen videos taken from Playalinda Beach at the north end of the KSC and they're not terrible.

Unlike their test flight last February, this time SpaceX got the center booster recovered, too.  Due to the way the flight is structured, the center core doesn't shut down until the first two boosters have dropped, and the remainder of the rocket stack is too far down range for the center booster to make it back to the land.  This is why they have their autonomous recovery drone, and they stuck the landing this time. 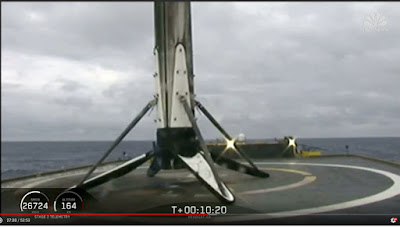 The drone ship is so far off the coast that it's way below the horizon, so there's no chance of seeing that.  The booster landing area can be seen from nearby, but the only time we've ever seen the return burn was during the night launch for the Crew Dragon test.  We can hear the sonic booms of the returning boosters, though, and heard them tonight.

Mrs. Graybeard and I settled on the "Space Coast" in the early days of the Shuttle program, 1982, and I had always wished that I had taken the few hundred mile trip from where I grew up in north Miami to see a Saturn V launch.  Stories I've heard from locals who were on the cape for one of those launches have only turned that into a haunting want.  We seem to be entering a new renaissance of space with plans on the book to get back to the moon relatively soon - whether that's on NASA's SLS, a private sector rocket or some combination is a decision that's still a long way out.  Maybe I'll get a chance to see a moon rocket after all.