Avengers Endgame And a Couple of Very Good Days

Speaking for Mrs. Graybeard and I, it has been a very good couple of days, and I've only barely been watching the circus that passes for news.

Two weeks ago, I updated her injury recovery from her fractured thigh bone back on March 2nd.  She was told she could start putting some weight on that leg, easing away from using her walker and switching over to a cane.  That was Monday the 8th.  That Wednesday she stopped using the walker and hasn't used it since.  Yesterday, three weeks since the last visit, we were back for a checkup with a final x-ray taken last Thursday.  The PA gave us the best words one could hear at this point: she's healed.  No need to rely on the cane to protect it, the bone has grown back well enough to give nearly zero chance of displacing at this point.  She can try to do whatever she wants, guided by the pain.  (By my guesstimate, it took her four hours to overdo it and get too sore)

One of the ideas behind that two week old post was that we had done what we would have done back when she hurt herself, and gone to the movies.  Today we were back at the theater to see Avengers: Endgame, the movie that broke the world record opening with over $1.2 Billion through Sunday night.  Only $357 Million of that was in the USA, so if that doesn't tell Hollywood that the world likes fun-filled, escapist, - did I say fun? - entertainment, I don't know what will.

Here is the closest I'm going to get to a spoiler in this posting, and you can read this on the IMDB page without spoiler warnings.  The movie is almost exactly three hours long - 181 minutes, 3:01.  I read one article about the movie that said they promised to not give anything away.  That guy's first point was: "the movie is three full hours long.  Go to the bathroom before you go to the theater.  Once you have your seats, drinks and what not, go to the bathroom again".  Sound advice.  DAMHIK. Along the same line of advice, unlike the other movies in the Marvel Universe up 'til now, there are no sneak-previews during or after the credits.  When the credits end (and the 3:01 hours includes the credits), the screen goes dark.  That five minutes of credits means a lot when you really have to use the bathroom.

While I'm a fan of the Marvel movies, I'm not a "fan boy."  I don't read movie or entertainment magazines or websites trying to figure out what's coming.  I actively tried to avoid any spoilers on this; I want my 3 hours of escapism and want to be surprised in the movie. Stopping short of spoilers, while I didn't actively go searching for information on the movie, I did see references to this being the 22nd and final film in the MCU story arc.  There has been talk about some of the stars of the series being off contract once this was done and that led to speculation of how the movie turns out: who gets killed and who doesn't.  I will only say I was surprised at who didn't make the end of the film and how one main character chose to end his involvement in the Avengers.

There is still a Marvel Cinematic Universe.  They appear to be starting a new group of stories, "Phase 4" that there are only hints about.  In the same theater, there was a poster for a new Spiderman movie opening July 2nd.  Spiderman was killed off in Infinity War, so you know he is rescued and survives the movie.  Or else, I suppose, it could be a prequel that was before Infinity War.  In the IMDB listings, you can look at the cast listing, click on their biography page, and see if a new movie is announced, in production, or being readied for release.

Listen, if you haven't seen any of these movies, skip this.  You'll never keep up with who's who, let alone 3/4 of the humor.  If you've seen all or most of them, you're probably going to see this one no matter what I say.  I think this is either the best or tied with the best of the other 21 movies.  Like Thor: Ragnarok, it was pure, lighthearted fun.  I laughed enough to feel sore; there were visual gags, there were brilliant gags and there were subtle gags.  For a movie about finding a way to go back in time and save half the population of the universe from being killed off, a very somber subject, it was surprisingly funny. 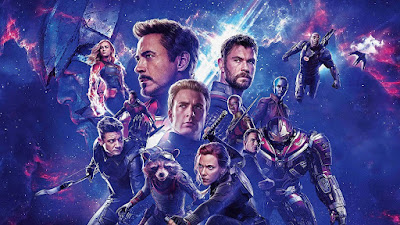 One version of the studio poster.