Annual Air Show Was a "Meh"

This was our annual air show weekend and despite waiting patiently in the backyard for my chance to grab some good shots, I've been unable to equal the kind of shots I've gotten of the Blue Angels in 2015 or my best shots of the Thunderbirds in 2017.  First off, the weather was very overcast on Saturday, and not much better Sunday.  Considering they started earlier in the day on Sunday, I'm guessing they delayed as long as they could on Saturday to let the clouds blow through.

In addition to the weather, the airshow stayed closer to the airport.  Part of that might be that the featured show was neither the Blue Angels nor the Falcons, but an F-35 Lightning Demo Team, a team that figures to be new and may not have their show figured out, yet.  Or their show may just be fundamentally different and not as showy as the other two, just as the Navy Blue Angels and Air Force Thunderbirds are different shows.  The clouds and winds might have had something to do with it, but they just simply didn't fly as far toward me (north of the airport) as the other teams have.

For example, this is about as good a shot as I could manage of an F-35. 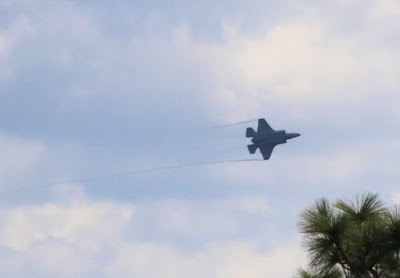 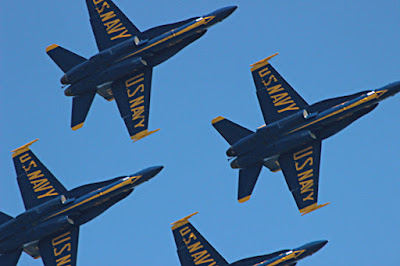 That's a world of difference in image size.