It's almost unfolding as you'd expect.  According to TTAG - The Truth About Guns - at Citicorp's annual shareholder meeting, they had their feet held to the fire for the way they impose on gun businesses.


Justin Danhof, General Counsel for the National Center [for] Public Policy Research and Free Enterprise Project posed a simple question. “Can you tell us – your investors – exactly how much money we stand to lose because of this decision, and explain why you have this right while Warren Buffet has this wrong?”

I say "almost as you'd expect" because Justin Danhof isn't from one of the mutual fund companies who are actively managing money for millions of Americans; his letterhead says, he's the General Counsel and Free Enterprise Project Director for The National Center for Public Policy Research.  He's interested, but it's not his job to be optimizing return on every penny.  Still, he's asking the right question: what makes you think you'll get me better returns on my investments than Warren Buffet and Berkshire Hathaway - who have made lots of millionaires over the years?  Buffet famously said,

Unfortunately, Citibank CEO Michael Corbat is either a moron or liar (not that he can't be both) because he really gave some stupidity for his answers.


Corbat said Citigroup’s policy to discriminate against firearms manufacturers and retailers who refuse to abide by their policy of instituting age-based gun bans – deny a right to keep and bear arms by a legal adult – wasn’t a Second Amendment threat, rather a “good practice.”

Corbat tried to couch it that they would only do business with retailers who conduct full background checks and no financing for companies who use loans to convert legal firearms into illegal firearms.

If it sounds confusing, it’s because Corbat purposefully was aiming to do so.

Since the readership here is generally quite aware of the laws for buying and selling guns, I don't need to quote the next paragraph from TTAG - but I will, with emphasis added.  The important point is that Corbat is either lying about what their practices are or he's too stupid to know he's asking them to do what they already do.  Again, not that he can't be both lying and stupid.


All federally licensed firearms retailers are required by federal law to conduct an FBI background check at the point-of-sale before they can transfer a firearm to a consumer. This is done each and every time. This is not a “best practice,” it’s the law which the industry supports.  Also, no firearms manufacturers use any money – lent, invested or earned – to convert legal firearms into illegal ones. It’s a quick way lose a manufacturing license and head to prison.

In Danhof's letter (pdf warning), he accuses Corbat of not meeting his fiduciary duties to shareholders, but merely following the lead of the liberal media:


The company joins a list of corporations following the liberal whim of the moment and not looking out for the best interests of long-term shareholders. CNBC talking head Andrew Ross Sorkin has been pressuring banks and credit cards to take a stand against gun rights. But you don’t work for the interests of a liberal journalist.

Corbat wouldn't commit to how much money this policy has cost Citibank, merely saying, it hasn't “cost us a meaningful amount of money.”  This is debatable, and there are details at the original article.

Like the rest of us, CEOs are never 100% right or wrong.  This is a wrong decision on the part of Corbat, or the Board of Directors.  Is it the only wrong decision?  Doubtful, but I don't know.  Citibank stands out especially because they're only in business today due to taxpayers bailing them out in 2008.  As their way of thanking taxpayers, Citi is making sure to deny 2nd amendment rights to taxpayers that are "too young" in their view.  It's none of their Citi's damned business.  If the gun store is following all applicable state and federal laws, that's all they need to know.

You know I'm dedicated to free market principles, and the right principle here is for the Mutual Funds and other Citi stockholders to hold Corbat responsible for a stupid decision.  Hopefully, word of this will get around and increase the chance they get rid of Corbat and get a saner CEO in place.  Which is why I'm passing the word around. 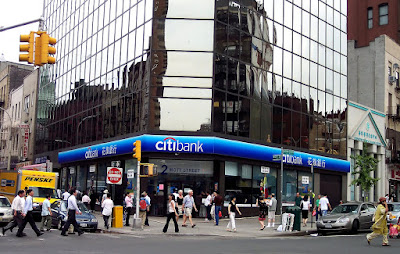