And the Answer is... None of the Above

Given that the answer is "none of the above," what's the question?  I've done a few posts about what engine I'm going to build next, (last post with links to the others).  That link shows five examples of Hit and Miss engines of varying sizes and features.  As I dug deeper, I found something about Hit and Miss engines that I wanted to avoid; the intake valve.  Short version: they all use the same approach as the Webster engine I just built, using cylinder vacuum to pull the intake valve open, and I thought that was a weak spot in the design.  I wanted something with a positive action for both intake and exhaust.  Push rods.  Metal (cam) pushing metal (rod) pushing metal (valve lever) pushing metal (valve) is more certain.

So after some talks about this on the forums I hang out with, I decided to build an engine by a modern engine designer, Brian Rupnow of Barrie, Ontario, Canada.  Brian just designed and built this engine over the period of mid-January to late April of this year, and posted his development as almost a work in progress blog on the Home Model Engine Machinists' forum. Brian sells complete plans of many engines, has had engines in Home Shop Machinist magazine, and offers tons of advise on various forums.  Brian just calls this his 1" bore by 1" stroke vertical IC engine.  It's going to look something like this, or at least it should: 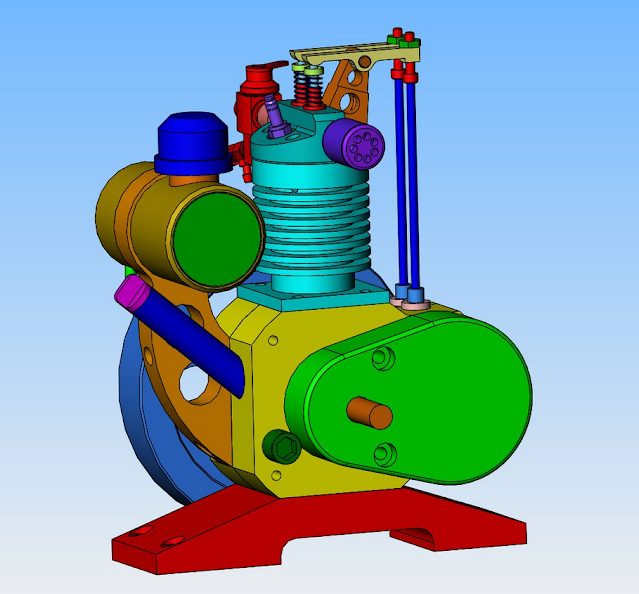 The nice thing about being a 1" bore and stroke is that you can figure the displacement in your head.  It's the volume of a cylinder: pi/4 times bore squared times stroke or pi/4 *1*1.  That's 0.785 cubic inches.

From the other side of the engine, you see the flywheel.  I don't think I'm going to copy his flywheel, which is multiple parts made of aluminum with a steel rim, held in place with brass pins.  I can get a cast iron or steel flywheel from several outfits or make one from a disk of 1018 steel as I did on the Webster.  Brian also made a fan from sheet aluminum to blow on the cylinder; I think mine is going to be printed plastic.

Brian finished in a few months.  That's highly unlikely to be my time.  First off he's a much more experienced machinist, and second off, I'm working from 2D prints in pdf files.  For parts that I want to CNC that will mean turning the 2D drawings into 3D models in CAD, and then using CAM or writing manual files to get the tool paths.  There are other things the prints call for that I should do; heat treating O1 (oil-cooled) steel; silver soldering some steel parts together, and so on.  These are things I think I know how to do in concept, but I'll need to test the details.

Those lessons are way in the future.  My first step was to go through the files (did I mention there are 47 single-page drawings?) and see what sort of stock I need to order.  I had plenty of some things but there's still plenty I need to order.  My CAD program (Rhino 3D, but an old version) is supposed to import .pdf files, and it does.  Unfortunately, it doesn't import the dimensions.  There are just lines on the screen, and the commands to create dimensions don't work for many things, so it's going to be a completely manual process.

Brian's video of his engine one of the first times he got it to run.  Mine might well be the only other one of these engines to be built.