The Professor Writes a Good Piece

Bouncing around the web today, I ran across a good article on Intellectual Takeout by Robert Weissberg, professor emeritus (retired) of political science at the University of Illinois at Urbana-Champaign.  His topic is the Bogeyman of Structural Racism and how it's absolutely non-scientific, and not subject to anything that anyone can do.

Given that structural racism is allegedly hard-wired into American society and responsible for a multitude of what were once believed to be self-inflicted pathologies among blacks, i.e., crime, illegitimacy, and academic failure, reversing it is to be a top-to-bottom enterprise. Critically, whites, not blacks, are responsible for such pathologies and thus must bear the brunt of social engineering.

What might explain this sudden alleged breakthrough in the way we approach structural racism? Surely it has not been developed by real scientists as they have been busy engineering a COVID-19 vaccine. Instead, the appeal of this theory rests on its nonscientific character, specifically, that it cannot be falsified and as such is beyond scientific scrutiny. It may or may not be a true account of America’s racial conflicts, but we will never know for certain, and absent this confirmation, it can be promoted endlessly and lucratively, or at least until the political forces advancing it dissipate.

I'll cut him some slack on his implication that the only real scientists were working on the Covid-19 jab, but he's right that there is no way to test the existence of Structural Systemic Racism and he's right that the inability to test the theory is a feature they want, not a bug.  In the past, when congress would pass an anti-discrimination law, analysts would later measure to determine if racial discrimination had declined in the aftermath of the law’s passage. Scientifically verified conclusions would eventually emerge.

Since, almost by definition, it exists everywhere in perpetuity, the gold standard before/after format of research cannot be applied. You cannot have a school where systemic racism is somehow removed and then compare test scores to one still infected by racism. Yes, everything in the “infected” school even hinting of structural racism might be removed, but still, as its proponents insist, racism, like gravity, will persist. There can never be a headline, “Brookings Study Shows Little Impact of Structural Racism.” It may in fact thrive in schools without white teachers, white administrators, white-authored textbooks, or comparable white causal agents.

As he says, why impose expensive programs like affirmative action if inescapable structural racism is the root cause of all evil?  If you can't determine that you've done anything to affect it, why do anything?  What could possibly be done?  Sure, some of them say it can be made better by killing all the white people but toxic structural racism might still survive.

Such antiscience thinking has deep roots in human existence and so its current reemergence hardly surprises. This mentality is everywhere. For example, observers describe “juju” in parts of West Africa where a priestly class cures ills and protects towns from catastrophes through spells and magic charms. For a fee of course. Juju can also enforce contracts or punish others. In the West there’s magical thinking where a person believes that his or her thoughts, in and of themselves, can influence another person, including harming them. So, since whites are supposedly hardwired to think badly of blacks, blacks suffer, and this suffering cannot be reduced via the usual ameliorative measures such as increased funding for education.

Western psychologists and psychiatrists treat magical thinking as a mental illness and one might thus aver that our current obsession with this unscientific systemic racism, toxic whiteness, and the like shows that American society is indeed going crazy.

This is where the talk about math being racist, white people talking about cause and effect and all that science shit ends up.  Science, as an organized, empirical approach to learning becomes useless. The damages from that are incalculable.

I rarely say something like this but you should look at the two links in the second paragraph (the first indented quoted paragraph) The first is a link to Nature magazine, while the second is a link to the Journal of the American Psychoanalytical Association.  Both of those, especially the Psychoanalytical Association paper, read like parodies of real papers to me.  There are no numbers; no measured data.  Only diatribe.  The Nature paper reads like companies bowing to the Woke mobs. 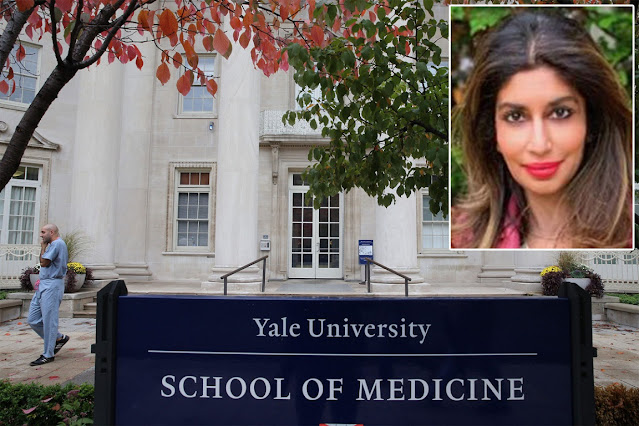 Image Credit: New York Post's Twitter account.  The woman pictured in the upper right inset is Dr. Aruna Khilanani, a psychiatrist, who said in front of a conference of other psychiatrists (all of whom are M.D. medical doctors), that she dreamed of "unloading a revolver into the head of any white person that got in my way." She then said she’d walk away from the shooting "with a bounce in my step," that white people "make my blood boil" and "are out of their minds and have been for a long time" — at the Ivy League institution’s Child Study Center.  And yet in a room full of medical doctors who treat mentally ill patients all the time not one doctor did anything to address her psychotic behavior.